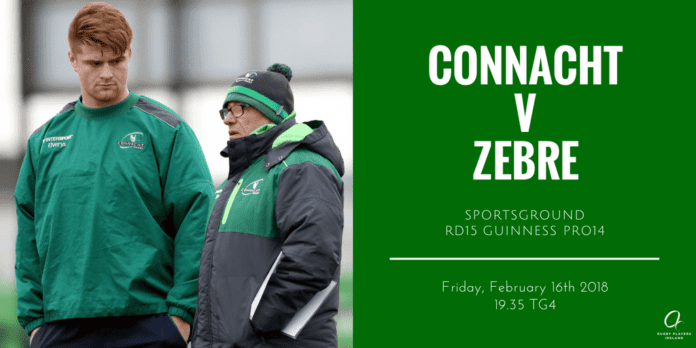 Connacht suffered a shock defeat in the Sportsground on Friday night as Zebre picked up their third victory in-a-row against the Western province.

It was a blow for Kieran Keane’s men who were strongly fancied to come away with the winning bonus point but they didn’t even manage to walk away with a losing one.

Despite a strong first half scrum, an error prone performance just got worse over the 80 minutes.  And even though Zebre conceded 20 penalties, only two Craig Ronaldson penalties was Connacht’s account before Darragh Leader got in for a consolation try with seven minutes remaining.

Ronaldson opened with a 17th minute penalty after Caolin Blade was fouled but two minutes later, the scale of their task was evident when Giammarioli go tin for the first Zebre try.

Carlo Canna converted to put four between them and they broke the Connacht defence again on the half hour only for a Canna pass deemed forward after Di Giulio’s score was given.

Connacht applied pressure before the break but took the option of the three points before half-time as Ronaldson left the deficit at 7-6.  But six minutes after the break, the expected overturn in momentum was shattered as Di Giulio finished off for Zebre’s second try.

Missed tackles and poor lineouts were costing Connacht dearly and even with some attacks from Tom Farrell and Matt Healy, they coughed up possession too often.

But on 63 minutes, the surprise result was confirmed as James Tucker blocked down an attempted Connacht clearance and replacement De Marchi raced to the line.  Canna added the two points to make it 19-6.

Connacht finally got a try when Leader finished off a strong lineout ball but Ronaldson missed the resulting kick to get inside the required seven-point deficit.  And to compound matters, Zebre suffered two sin bins for Maxime Mbanda and Rory Parata.

It’s a bad result regarding momentum and the chase for a Champions Cup place.  And if they fail to get back to Europe’s elite competition, this result will be considered a major reason why.

An incredible display from @ZebreRugby sees them go 12-6 up over @connachtrugby.

👟🏉🙌❌ @ZebreRugby are charging towards a famous victory 👏Andrea di Marchi gets their third try of the match, leaping on a charged down kick to score.