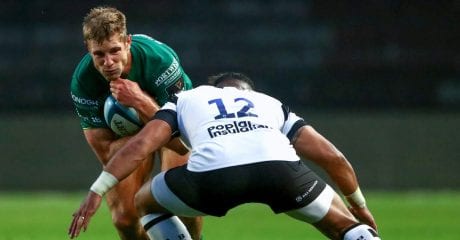 New Connacht signing Kyle Godwin is set to make his Connacht debut as Andy Friend’s side take on Glasgow Warriors in the Sportsground in the opening game of their Guinness PRO14 campaign on Saturday (1st September).

Godwin forms a midfield partnership with last season’s Connacht Fans’ Player of the Season, Tom Farrell.  The back line also includes the ever present Tiernan O’Halloran at full back with Connacht’s record try scorer Matt Healy and Cian Kelleher on the wings.

In the front row, Denis Buckley and Finlay Bealham start at loose head and tight head respectively with Mayo native Dave Heffernan given the nod at hooker.

Meanwhile in the back row, newly appointed captain Jarrad Butler is selected at openside with Academy player Paul Boyle named at blindside after impressive performances in the pre-season fixtures.

“We’ve had three good pre-season games,” said new coacht Andy Friend who oversaw three wins from as many games.  “You don’t win championships in pre-season, but you can lose them. We’re at the start line in pretty good shape but it’s what we do from here that’s important.

“We are expecting a massive challenge from Glasgow on Saturday afternoon. They got off to a roaring start in last year’s campaign and I have no doubt they will be looking to do something similar this season. They have great strength and depth in their squad so it going to be a big challenge.

“I have heard so much about the atmosphere that our fans create in the Sportsground and I can’t wait to experience it on Saturday.”

Connacht face Glasgow in their opening fixture of the 2018-19 Guinness PRO14 Championship on Saturday, 1st September.  Kick-off at the Sportsground is 3pm.