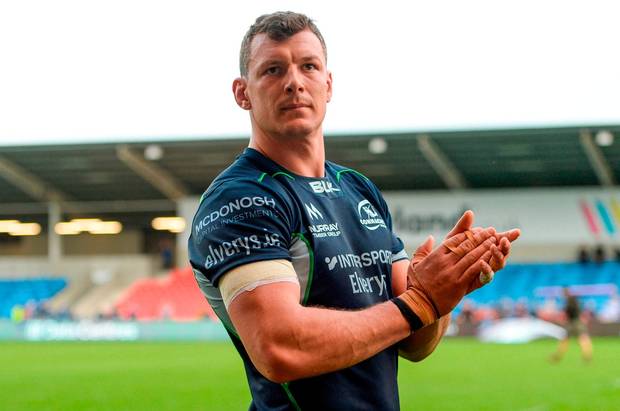 Ashton had served a seven-week suspension for a hip tackle but was determined to make an impression and started just before half-time.

Beforehand, things were going well for Connacht and they led 13-6 after Shane Delahunt went over.  Academy player Conor Fitzgerald kicked an early penalty that also resulted in Sale’s Faf de Klerk being sinbinned and the Connacht out half doubled his tally.

Upon his return, De Klerk converted two placed balls to level affairs but Connacht set up a potential shock on 32 minutes when the pack did the work.  Delahunt finished off the try and Fitzgerald scored the conversion for a seven-point lead.

But it lit a fire underneath the home side in the AJ Bell Stadium in Salford and they were back on terms before half-time.  Ashton scored, De Klerk converted and the second half belonged to Sale Sharks.

In a three-minute period, Josh Beaumont and Ashton scored tries while Connacht also lost Paul Boyle to a yellow card on 59 minutes.  Six minutes later, Ashton completed his hat-trick for the bonus point to secure a comfortable win.

With Bordeaux and Perpignan drawing, Connacht will still feel their qualification hopes are in their own hands and their double with the latter in December will be crucial in reaching the quarter-finals.  Perpignan visit the Sportsground on Saturday, 8th December.

Connacht’s next outing is against Ospreys in the 2018-19 Guinness PRO14 Championship on Saturday, 26th October.  Kick-off at the Brewery Field is 8.05pm.