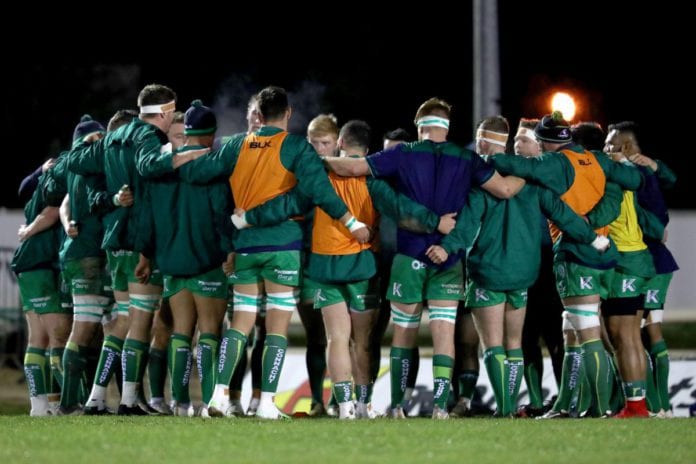 While every match these days feels the same, Connacht enter their most important game of the season knowing that defeat in Wales will effectively end their Champions Cup aspirations.

After racing with Cardiff Blues for fourth spot in Conference A before pulling up; and seeing their European Challenge Cup ambitions ended by Gloucester last week, Kieran Keane’s men need to beat Ospreys on Friday evening if they are to keep a European play-off spot alive.

With Toyota Cheetahs (South Africa) not eligible for continental action, fifth place in Conference A will meet fourth in Conference B for the seventh PRO14 spot.  And being a point behind their opponents and conceding a game in hand, Connacht simply can’t afford to lose.

Keane has made seven changes from the team that fell to Gloucester but the reasons why their most noteworthy name is absent just three weeks from the end of Connacht’s regular season is baffling – Bundee Aki is on holiday!

Understandably, the player welfare system used by the IRFU may have forced him to sit out the game (even if he did miss the Edinburgh game) which is no fault of the player but Instagram pictures enjoying the heat of Lanzarote hardly has a positive effect on team spirit!

Either way, Aki and Tom Farrell make way for a new centre partnership in Eoin Griffin and Peter Robb with the other five changes in the pack.

Shane Delahunt and Conor Carey in the front row, locks Ultan Dillane and James Cannon along with Sean O’Brien in the back row come into the team.  Tom McCartney, Finlay Bealham, Gavin Thornbury, Quinn Roux and John Muldoon make way.  Jaarad Butler captains the team for the first time.

Connacht beat Ospreys 26-15 in the Sportsground in February thanks to tries from Eoghan Masterson and Farrell but the Welsh team haven’t been beaten since.

That was Allen Clarke’s first game in charge and he has seen his team go on an impressive run with home wins over South African pair Southern Kings and Toyota Cheetahs before an impressive 32-18 bonus point victory against Leinster that allowed them leapfrog Connacht.

A team littered with internationals sees just two changes as Guy Mercer and James King come into the back row.  Olly Crackwell is out with a shoulder injury and Justin Tipuric is competing with the Wales sevens in the Commonwealth Games.

Out half Dan Biggar could play his last match in the Swansea venue before departing for the Northampton Saints with centre Ashley Beck another moving on in the summer.  Biggar is one of four Welsh players starting along with Nicky Smith, captain Alun Wyn Jones and Bradley Davies.

Predictions have to be on form and Connacht have lost their last three games in a row.  Their season has dipped significantly since a Christmas rush.  Ospreys are deserving 3/10 favourites but if there is one last gallop in Connacht’s season, now is the time.