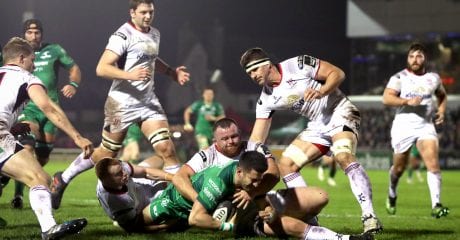 Connacht have no fresh injury concerns ahead of their second interprovincial derby away to Leinster on Monday (1st January, 3.15pm) after their Medical Team issued a squad update on the club’s official website.

The 15 players who started their stunning 44-16 victory over Ulster two days before Christmas are all available as Kieran Keane’s men look to build on the momentum from that result and their two successes against Brive in the Challenge Cup.

Jaarad Butler marked his return with a try having not played since October and he has had no ill effects.  Also in the back row, Eoin McKeon is progressing well in his rehabilitation from a calf injury and will be out of action until the end of January.

Try number 5 scored by Jarrad Butler after a some patient build up inside the Ulster 22. #CONvULS pic.twitter.com/DduPeJWkAP

In the front row, Denis Buckley’s ankle injury against Brive keeps him on the sidelines for a number of weeks.  Dominic Robertson McCoy will integrate partially into training over the next two weeks and will return in early January.

JP Cooney is recovering from hamstring surgery and is unavailable until April.  Pat O’Toole sustained a hamstring injury in training and will be out for a number of weeks.  While Andrew Browne has stepped up his rehabilitation from his Achilles injury and will return to the second row in early January.

In the backs, out half Steve Crosbie will be out of action until the end of January with a knee injury.  Rory Scholes has stepped up his rehabilitation from his abdominal surgery and will return to action in early January.  And Cormac Brennan will return in February following shoulder surgery.

Connacht are level in fourth place of Conference A with Cardiff Blues after the Welsh side secured a 22-17 win over Dragoons on St. Stephen’s Day and will be anxious for a result to maintain their push for a Champions Cup spot.

Leinster are secure in second place in Conference B but will be wary of an upset after watching their rivals’ performance against Ulster.  The Connacht starting 15 will be announced on Saturday, 30th December.

Briain Kelly - December 2, 2021 0
There have been a further 4,163 confirmed cases of COVID-19 reported by the Department of Health today.As of this morning there were 545 people...

Over 200 children in COPE emergency accommodation this Christmas

Portiuncula Hospital has worst November on record for overcrowding