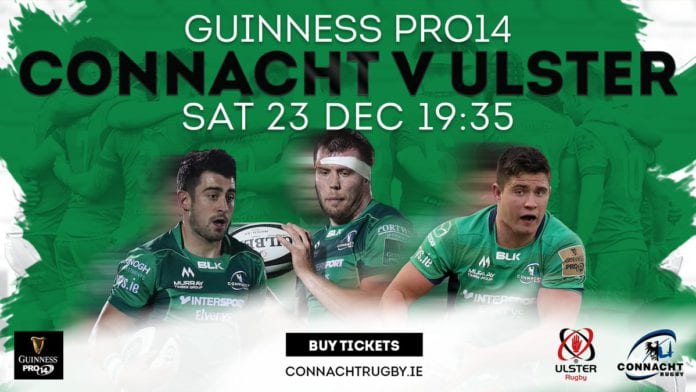 Connacht brought their European form back to domestic competition on Saturday evening as they overran Ulster in front of a capacity crowd.

Kieran Keane’s men hit six tries in front of 7,629 supporters to score their second win in 12 encounters against the Northern province to move to fourth place in Conference A of the Guinness PRO14 championship and put themselves back in the Champions Cup qualifying places.

Ultan Dillane hit two tries in the bonus point mauling with Eoghan Masterson, Bundee Aki, Tiernan O’Halloran and Jaarad Butler also going over the line while Jack Carthy got 17 from the boot for a record win over Ulster.

It was evident from the start that Connacht were up for this and it took only four minutes for the first try.  The home side were applying pressure with Matt Healy gaining ground but eventually a rolling maul allowed Masterson hold possession to make it 5-0.

.@connachtrugby's Matt Healy was named Man of the Match for his performance in today's brilliant win over @UlsterRugby!

Here he is receiving his award from Rodney O'Donnell on behalf of Guinness.#GUINNESSPRO14 pic.twitter.com/g8tx8jLvK0

Four minutes later, Kieran Marmion broke the defensive line to set up another attack and Aki was on hand to receive the offload and put Connacht on double digits.  After missing his first effort, Carty opened his account.

Ulster were struggling to match Connacht’s intensity but did get off the mark on 23 minutes when former Connacht half back John Cooney got the game’s first penalty.  But Connacht’s response was instant as O’Halloran used his power to get the ball in for the third try even if the television match official took time to make the decision.

Cooney and Carty traded penalties to leave it 20-6 in Connacht’s favour at half-time before another Carty kick after the restart put 17 between the teams.

Andrew Warwick received a yellow for repeated infringements and they were briefly down to 13 men when Louis Ludik also was sinbinned for a deliberate knock on.  Connacht continued the assault and the bonus point was secured on 57 minutes when Dillane went over.

Carty made it 30-6 and Connacht’s delight didn’t relent as Butler scored the fifth try on the hour mark.  Craig Gilroy got Ulster’s first five-pointer on 65 minutes as they tried to reduce arrears but with four minutes remaining, their frustrating evening was summed up with one passage of play.

Camped on the Connacht 5 metre line, Ulster looked destined for another score but an interception saw the Westerners bring the attack the other end and Dillane finished with his second to cap off a memorable evening.

Substitute Rob Lyttle got a consolation Ulster try in the final minute but Les Kiss’ men were heavily defeated despite coming into this contest unbeaten in five away encounters.

It was the perfect start to Connacht’s festive programme and they now prepare to face Leinster on New Year’s Day in the RDS (3.15pm).  But they can enjoy a few days off in good form and confident ahead of their next tests.