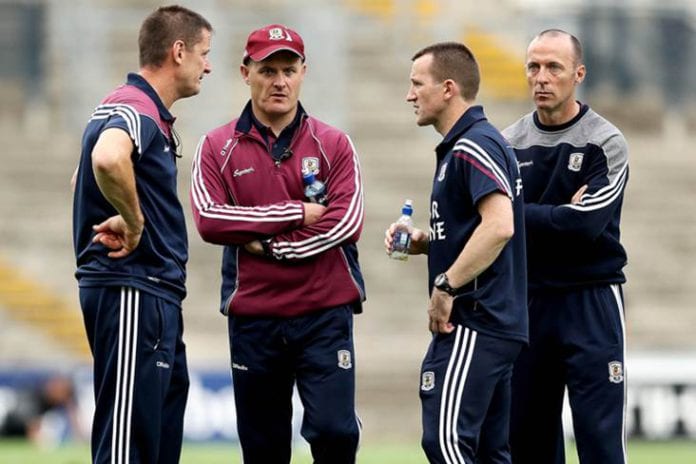 Galway hurling manager Micheal Donoghue has recalled tough days and some ‘over the top’ criticism he received in his two-year journey before ending the county’s 29-year wait for the Liam McCarthy Cup in September 2017.

Speaking with Galway Bay FM’s Sean Walsh, the Clarinbridge man recalled receiving phone calls and letters at home after his team’s relegation from Division 1A in 2016 and the following season’s home defeat to Wexford which denied them immediate promotion.

“Wexford had won down in Limerick, so it was a key game for us very early in the season,” said Donoghue in the interview.  “That said, you are mindful of your preparation and where you’re at, and going into that game, Wexford deserved to win.

“We know if we have a bad day, and occasionally you will have bad days where things don’t happen for you.

“The reaction we got after that was phenomenal. People listening to this may think that if you lose you deserve criticism, but this was totally over the top stuff. We were getting phone calls, letters to the house.”

It was the only defeat Galway suffered in 2017 as they went on to beat Tipperary in the league final.  But that loss ensured Galway will still ply their trade in the league’s second tier after they lost to Cork in the 2016 relegation final.

“I remember two days,” added the Clarinbridge man who led his club to All-Ireland glory in 2011.   “The day we got relegated. Coming off the pitch, the personal verbal abuse. I don’t mind taking criticism, you have to when you are in the game.

“But when someone comes in front of you and gives you personal abuse and starts insulting you and your family that’s a bit over the top. I just felt the Wexford game, I felt it was over the top.”

However, all fell into place for Galway’s hurlers when they secured their first All-Ireland title since 1988 and after they return from their festive holiday in North America, the focus will solely be on 2018 with Antrim visiting Pearse Stadium on January 28th.

“Our focus will always be totally on the lads and how we can improve,” added Donoghue.  “That’s going to be our total focus once we come back in January.

“The reception and everything we have got since the game. The lads are on their holiday which is well deserved.

“We probably still will be getting lots of requests in 2018 but from my perspective now we have got to get back to work. I hope people respect and are comfortable with that and we won’t feel it.”