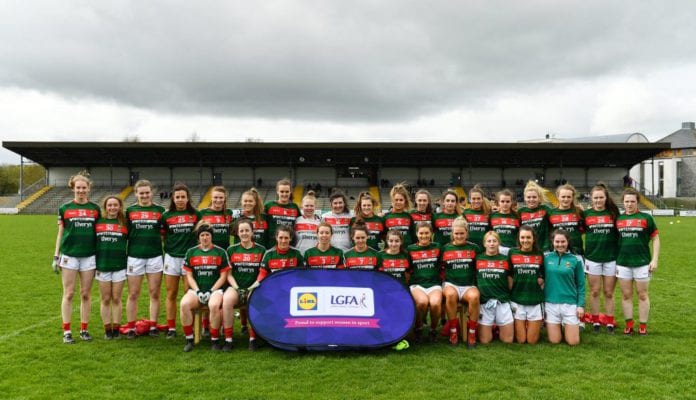 Mayo’s hopes of a first national title since 2007 never got out of the starting block in Parnell Park as Dublin struck in the opening quarter to build a match winning lead.

Sinead Aherne, Laura McGinley and Noelle Healy got Dublin’s goals but it was the 1-5 to 0-0 head start the All-Ireland champions got that ultimately decided the league title.

Mick Bohan’s team were well onto their way to a first league crown when after taking a 0-2 to 0-0 advantage, semi-final goal scoring hero Nicole Owens was brought down and Aherne struck the resulting penalty to the net.

"All hands on deck" some brave goal keeping & defending on display from @Mayo_LGFA as Laura Mc Ginley scores a goal for @dublinladiesg in @lidl_ireland Div 1 Final today. @LadiesFootball pic.twitter.com/2mvlSlE7c9

Olwen Carey, Niamh McEvoy and Aherne added the white flags for their eight-point cushion but Mayo started settling into the tie through Fiona Doherty’s opening point and Sarah Rowe.

However, despite Rachel Kearns producing some good saves including one from Laura McGinley, the late Dublin replacement did get their second goal after being set up by Lyndsey Davey.  It made the score 2-9 to 0-4 which was the 11 points that separated the teams at the finish.

Rowe scored a Mayo penalty and Grace Kelly left it 2-9 to 1-5 but when Healy attacked with one of her trademark runs before finishing to the net for Dublin’s third major.

Sinead Cafferky, Kelly and Rowe did help Mayo rally back but the contest had been settled.  Dublin completed their own unique double ensuring they’ll be strong favourites for the championship campaign.