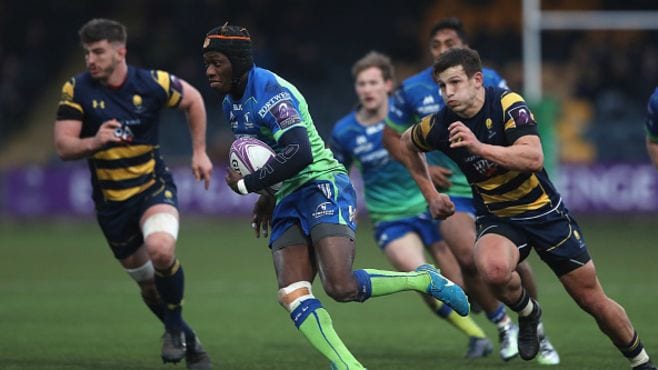 An entertaining first half followed by a battle for supremacy saw Worcester Warriors and Connacht share the spoils in Saturday’s European Challenge Cup encounter.

For Connacht, it secured their quarter-final place even if they’ll need a result against Oyonnax in seven days to ensure it’s a home tie.  But it’s unlikely an Irish semi-final will occur should Kieran Keane’s men advance that far.

Connacht had chances to win this after conceding two early tries and trailed until Tiernan O’Halloran’s try on 59 minutes.  But they preserved their unbeaten status even though they played with just 13 men for nine minutes.

Supporters barely had time to settle when the home side were 12 points ahead.  Francois Hougaard kept the ball in play before a Dean Hammond run opened the defence on two minutes.  Josh Adams kicked the ball through and Perry Humphreys got the touch down.

Chris Pennell registered the conversion before he also received a 10-minute sinbin for a trip on Kieran Marmion.

Beforehand, Worcester Warriors were threatening to run out of sight as on five minutes, they got over the line again.  GJ Van Velze’s volley was kicked on by Humphreys and Sam Lewis was ready to finish for a second five-pointer.

Connacht needed a reprieve and it came from Pennell’s departure.  And from the back of the scrum, John Muldoon capped his 50th Challenge Cup appearance on 17 minutes with their first try.

Craig Ronaldson was unerring from kicks and reduced the deficit to five but Worcester were back in the ascendancy on 22 minutes when Connacht lost their shape allowing an overlap and Adams’ long pass picked out Humphreys for his second try.

Pennell didn’t convert, his second miss, and this proved costly as Worcester had a presumed winning bonus point at half-time.  Beforehand, Bundee Aki looked to have scored for Connacht only to be adjudged to step into touch.

But Niyi Adeolokun punished sloppy opposing play to find a gap and break the defence for Connacht’s second try.

Ronaldson’s kick left it 17-14 but Worcester wouldn’t be denied.  Two tackles by Quinn Roux and Jarrad Butler saw both see the line and Adams took advantage against Connacht’s 13 men getting their fourth try to lead 24-14 at half-time.

Connacht’s afternoon looked to get worse but a gallant work rate kept their opponents out.  Indeed, the home team didn’t score in the second half.

A Ronaldson penalty on 53 minutes left one converted try between them and it arrived six minutes later. O’Halloran broke two tackles to get over the line and Ronaldson made it four from four for parity.

Conor Carey also had a late Connacht score but the ball was adjudged to have been knocked on.  The Irish province looked determined to get their fourth try refusing penalty offers but it didn’t arrive.

They settle with two points, stay unbeaten and qualification is secured.  But they’ll still need a win against Oyonnax to keep the Sportsground buzzing in April.

Wow! A tense finish to a great game which sees Worcester finish with a try bonus point in a draw with Connacht.#ChallengeCup pic.twitter.com/cv91VIXiPu

epcrugby.com said – “the Irish province produced an inspired display to claim a 24-24 stalemate at Sixways on Saturday afternoon.”