2018 is shaping up to be an excellent year for scientific discovery- The BT young scientist results are out and the competition has showed a higher standard of work than ever before. Galway students were among those taking home huge prizes- including the first place in the Junior Group category, a highly prestigious award.

The winners of this prize were Aoibhe Briscoe, Ellie Concannon and Katie Owens from Coláiste Iognáid school. The girls’ project was titled Think Before You Drink: Microplastics. It was concerned with how water pollution has led to a disturbing level of microplastics in the water we drink everyday. One of their findings was particularly shocking- the level of microplastics in the classroom water was at 2.7, much higher than the European average, while the staff room water was much lower at 1.6. The girls discovered that a lot of the time staff’s water would be filtered while pupil’s would not, something that stunned them. It’s no surprise that they also took  an Environmental Protection Agency Special Award

These students are following in the footsteps of  another Galway student Thomas Hayes, a 6th year. Thomas, representing Yeats College, won third prize in the Senior Individual Category last year. The title of his project was The Alternative Heart Valve Design, his goal was to develop heart valve prototypes for use in treating heart valve disease. 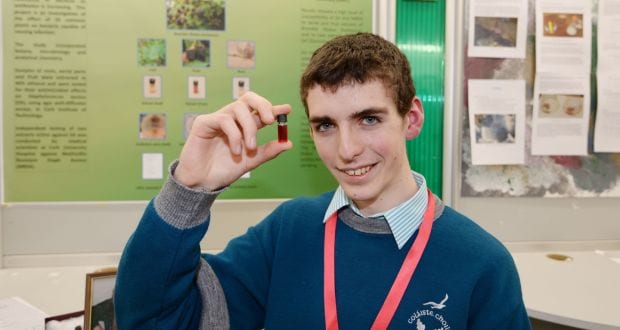 This year’s overall winner, however, hailed from Cork. Simon Meehan’s ‘Investigation of the antimicrobial effects of both aerial and root parts of selected plants against Staphylococcus aureus’, took the judges by storm and earned him the top spot. A transition year student, Simon now has the opportunity to represent Ireland in the European Union Contest for Young Scientists.

As the BT Young Scientist Awards end for another year, it’s a reassuring thought to know that the future of science is safe in the hands of Ireland’s secondary school students.