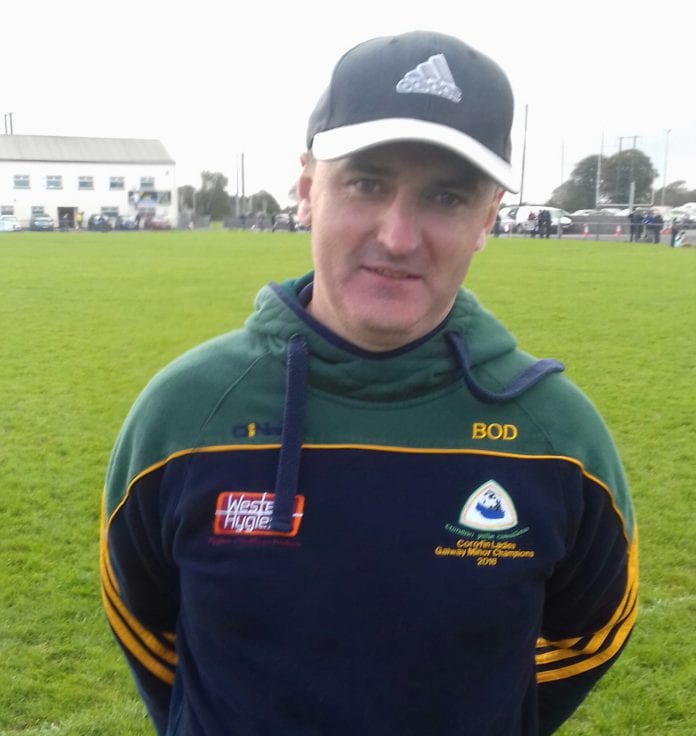 Last year’s county finalists came from seven points behind to twice put themselves in winning positions only to see their opponents refuse to stay down.  After taking an early count, Corofin must have thought they’s struck the winning blow only to see Moycullen keep beating the count of 10.

“We didn’t expect that,” said O’Donovan afterwards.  “Fair play to Moycullen.  They put up a serious battle and it could have gone either way.

“It was great character to come back from seven points down.  The girls never gave up.  They kept going.”

Moycullen led 1-6 to 0-2 after 15 minutes before Corofin started their revival and Roisin Leonard’s goal gave them a two-point advantage.  But they couldn’t rest on their laurels as Moycullen replied again to lead by three early in the second half.

Congrats to the Galway U 14 girls who won the All Ireland B Final. On team were: 6 Corofin girls and Brian O'Donovan on the management team.

“I think, as we all know, there isn’t really positions anymore,” added the former Galway under 14 and minor manager.  “It’s all about work rate.  We just found it hard to get on the ball.

“We all know how strong their (Moycullen‘s) midfield is.  We just kept going.  We just had to try and get on the ball.  And once we did, we put up a very good score.”

Corofin finished with 1-23 which will have pleased their manager.  And they also forced four quality saves from Roisin Ni Chonghaile though Karen Connolly also made vital stops from numerous Moycullen attacks.

“Two top class keepers,” added O’Donovan.  “Even ourselves, the Galway senior goalie (Dearbhla Gower) during the year and the Galway minor goalie (Connolly).  The two of them, they push each other at training sessions.

“This is all experience.  Our goal at the start of the year probably was to get to the county final.  This is going to take time.  This mightn’t happen this year or next year but as long as we keep improving.

“It’s a serious achievement for the girls.  As I said, at the start of the year if we got to the county final, we would have been happy.”