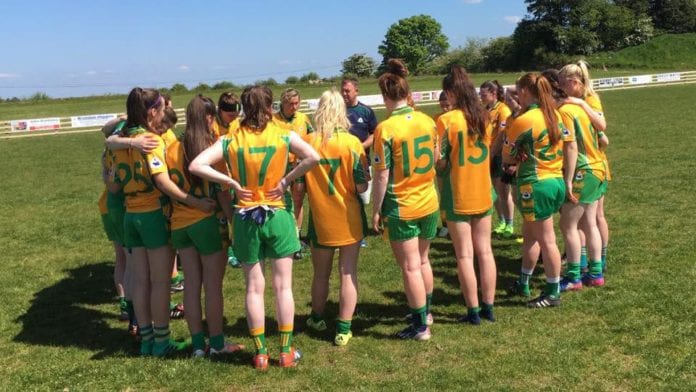 This ladies football semi-final produced an enthralling spectacle as Corofin edged over the line.  In a contest that they trailed by seven points at one stage, Brian O’Donovan’s charges managed to go three ahead but a determined Moycullen clawed their way back to force extra time.

However, the eventual winners’ experience told in the latter 20 minutes as Roisin Leonard (2) and Amy O’Donovan created another three-point advantage.  And while reducing arrears before the finish, last year’s intermediate champions missed crucial chances to deliver a shock.

Corofin were strong favourites but Moycullen had beaten them in the league shield final and started with intent racing into a 1-6 to 0-2 lead on 15 minutes.

And on eight minutes, the west Galway team, minus the injured Ailbhe Davoren, showed they weren’t here to make up the numbers.  Aisling Corcoran, Catherine Connaire, Molly and Lucy Hynes were involved before Megan Davoren arrived to get the first goal.

Keady, Katie Carter (2) and Elena Davoren added white flags to put seven between the sides but Corofin didn’t panic even if gaps in defence will need tightening before the final.  They struck five unanswered points through Tracey Leonard (3), Eva Higgins and Orla Newell before getting their goal.

Roisin Leonard calmly kicked to the net on 24 minutes after an attack down the right instigated by Tracey Leonard, Higgins and Burke.  And after Carter equalised, Burke and Tracey Leonard made it 1-9 to 1-7 in Corofin’s favour.

Moycullen turned things around as Aine McDonagh pointed before Keady got the second goal as they took a 2-9 to 1-10 half-time lead.  And the girls in green didn’t relent with McDonagh forcing Karen Connolly to deflect the ball over and Keady added a score as Moycullen led 2-11 to 1-11 on 33 minutes.

But they went 18 minutes before their next minor as Corofin commenced another comeback.  Roisin and Tracey (2) Leonard got back on par on 43 minutes before Lisa Leonard, Leanne Coen and Roisin Leonard put the nine-time former champions 1-17 to 2-11 clear entering the final 10 minutes.

Moycullen fought back as Carter (2) and McDonagh levelled.  And despite Tracey Leonard giving Corofin the lead, Keady held her nerve to force extra-time.  Corofin tagged over the points going three ahead before McDonagh registered for Moycullen.  Burke’s effort made it 1-22 to 2-16 at the change of ends.

Moycullen chased the contest upon the restart but a lack of experience told against them as poor decision making and wides saw them struggle to close the gap.  Keady and Tracey Leonard traded before two more Keady placed balls left one between them.

A shoot-out was possible but Moycullen couldn’t find the equaliser and Newell nearly wrapped it up for Corofin only for Ni Chonghaile to deliver another outstanding save.  Moycullen have made huge strides in 2018 but it’s Corofin who’ll challenge for the title.