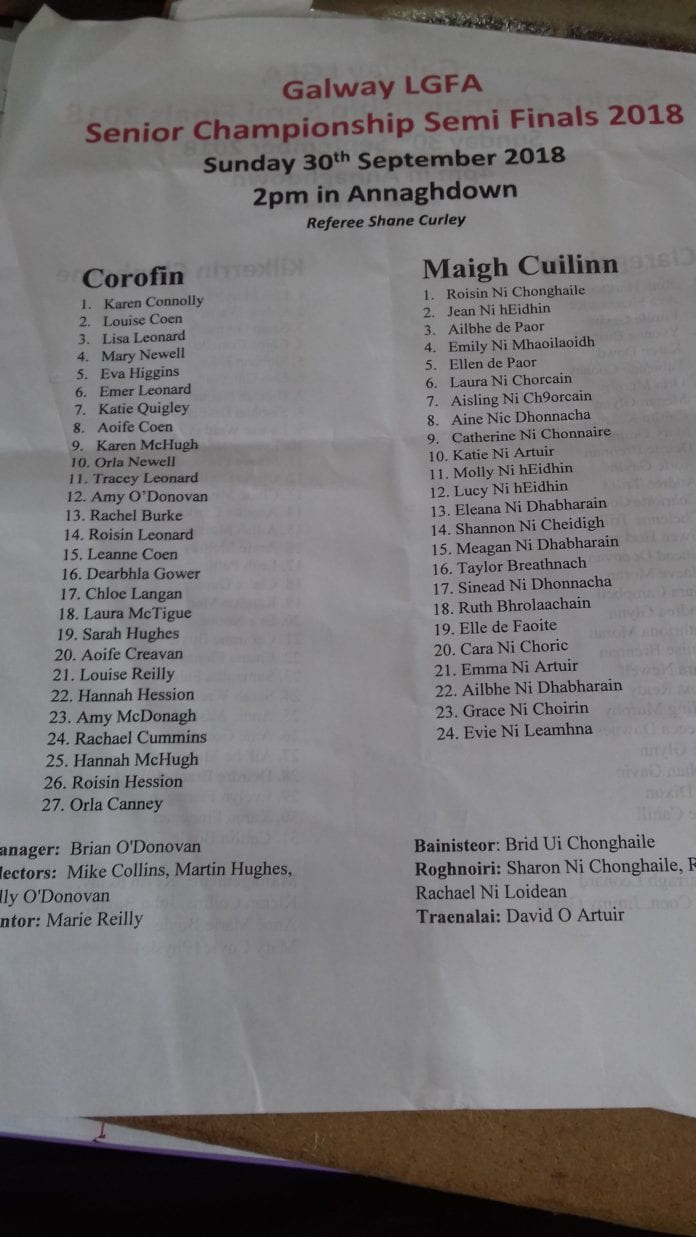 They were as positive as possible after leaving the field and no doubt, and rightfully, many were telling them what a brilliant effort they put in but Moycullen’ senior ladies football team will only feel pain this week after seeing a golden opportunity slip in an epic county semi-final.

Yes, they’d beaten Corofin in the Shield League Final but realistically speaking, many attending Annaghdown on Sunday were expecting formalities regarding the results and the west Galway outfit weren’t given a hope.

It was easy to see why!  They were only promoted last year (2017) after winning the intermediate championship.  And they conceded 10 goals to Kilkerrin/Clonberne in the group stages.  To reach the semi-final was an amazing achievement but they were the ‘token holder of fourth spot.’

Well, nobody told Brid Ui Chonghaile and her young charges who played their part in probably the game of the year.  And had they just a bit more experience, or cuteness, they would be playing their first county senior final as hosts on Saturday (6th October).

Despite missing county star Ailbhe Davoren, they charged at Corofin with Megan Davoren finding the net and a performance inspired by Shannon Keady, Molly Hynes, Katie Carter and Aine McDonagh found them 1-6 to 0-2 up on the quarter hour – against the wind.

Needless to say, Corofin were rattled but they weren’t complacent.  They were creating opportunities but found goalkeeper Roisin Ni Chonghaile in inspired form.  The Moycullen stopper delivered four stunning saves over the 80 minutes.

But while Corofin will stress they are also a young side learning, they are slightly more established then their west county counterparts and used every bit of that knowledge to claw their way back.

Roisin and Tracey Leonard were the stand out performers in attack sharing 1-16 but the work load being put in by players like Lisa Leonard, Aoife and Leanne Coen couldn’t be ignored.

Corofin got ahead after Roisin Leonard’s 24th minute major but they still were behind at half-time as Keady’s goal gave Moycullen a 2-9 to 1-10 lead.

When McDonagh and Keady added white flags upon the restart, there was every reason to believe that something special was on the cards but Corofin refused to buckle and six unanswered points through Leanne Coen, Roisin, Tracey and Lisa Leonard had them 1-17 to 2-11 clear.

It’s just a pity nobody was videoing this match as I dare someone to produce a better game played this season.  Moycullen wouldn’t go away and through Carter, McDonagh and Keady, they restored parity and forced extra-time.

You couldn’t take your eyes off this!  Roisin Leonard, Amy O’Donovan and Rachel Burke gave Corofin a 1-22 to 2-16 lead at the break while their keeper Karen Connolly was delivering her quota of stops.  And Moycullen kept coming.

What will hurt Moycullen is they owned the second period but just couldn’t manage the necessary scores.  Whether it was adrenalin, nerves or just lack of experience, a few chances spurned made getting back difficult.  But with Keady doing well on frees, they finished just one point short.

Firstly, lets applaud Corofin for their response and they will take much from this before the county final against Kilkerrin/Clonberne.  They allowed Moycullen too much space in defence and will be punished if they repeat this.  But their “young” team showed great strides in maturity.

Moycullen have achieved so much in 2018 and while disappointed, their supporters left with pride.  To put in that display was remarkable and while they may settle for fourth spot this year, they put those head on alert that they want more in 2019!

Galway restaurants targeted with fake bookings ahead of reopening

Weather Warning: Thunderstorms, hail, and downpours to cap off heatwave