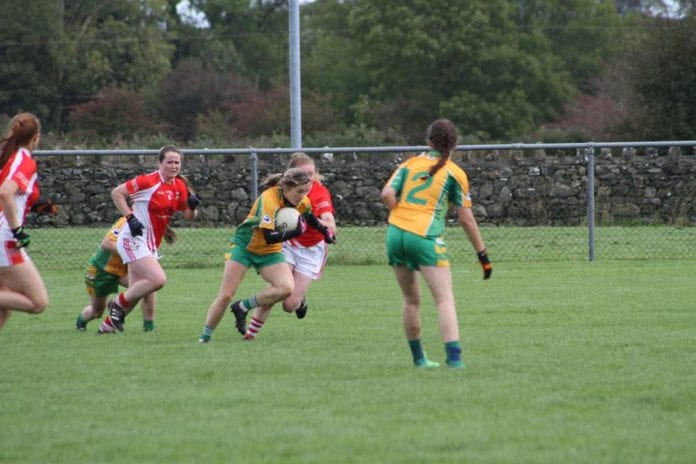 Kilkerrin/Clonberne and Corofin go head-to-head this Saturday (6th October) in the County Senior Ladies Football Final.  It’s a repeat of the 2017 decider when Kilkerrin/Clonberne completed a domestic five-in-a-row in Menlough with a 1-14 to 2-9 victory thanks to an Annette Clarke penalty.

The defending champions are strong favourites to successfully retain their title before heading off on provincial missions with Carnacon in sight.  But first they have to stamp that ticket against a Corofin outfit who’ve pushed the red and white closely in their last championship meetings.

As well as the aforementioned, Aoife Coen is a prominent midfielder whose work rate will be vital to ensure the supply line into the attack.  And while the defence, led by keeper Karen Connolly and captain Lisa Leonard will be busy, they will need to be tighter against the current senior dominant force.

And while the duel between Corofin’s attack and Kilkerrin/Clonberne’s defence will be crucial (especially as the champions are without the injured All-Star nominee Nicola Ward), it’s the other end of the field that could decide this game.

Kilkerrin/Clonberne have scored 27 goals in four championship matches including their 2-14 to 1-6 semi-final win over Claregalway.  But they found the going tough for long stages in that hurdle and their opponents didn’t punish their vulnerability like Corofin will.

While they still have county keeper Lisa Murphy and defenders Lisa Gannon and Sarah Gormally, it’s from midfield that Kevin Reidy’s team can be dangerous.  Siobhan Divilly and Louise Ward are a strong partnership supplying Olivia Divilly, Lynsey Noone, Maeve Flanagan, Clarke and Ailish Morrissey.

Key matches should include Gormally and Gannon picking up the Leonard forwards while Louise Ward and Aoife Coen can expect to spend time together, it’s how Corofin deal with Kilkerrin/Clonberne’s attacking options that could be decisive.

Moycullen were allowed plenty of goal opportunities while Kilkerrin/Clonberne, while not firing on all cylinders, found the target at critical stages against Claregalway.  But were Kilkerrin/Clonberne tested hard enough as there is no doubt Corofin were taken to the pin of their collar.

However, this county final promises could be is a classic and, especially missing two key players, Kilkerrin/Clonberne are vulnerable.  Can Corofin take advantage is the question.  They have the talent and last year’s county final should give them the belief.

Kilkerrin/Clonberne were given much to think about after their semi-final and are fully aware it could fall apart if they aren’t tuned in.  Corofin will push them. It should be close.   But Kilkerrin/Clonberne have enough to ensure they remain the champions through another winter.