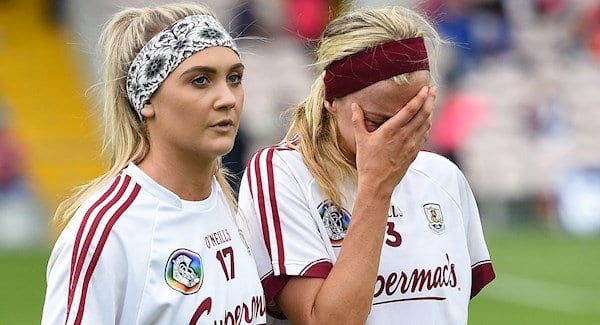 The a general rule when it comes to finishing a Leaving Certificate examination is not to talk about it.  You’ve studied (enough you hope), you’ve gone in, sat the exam and it’s done.  Chatting about it afterwards among your friends is not going to make you feel any better.

Modern sport, and the era of analysis, is much different and games lost can’t be parked.  They shouldn’t be either but it’s how long you dwell that can be a factor.

Before we write, hopefully for the last time, about a year for Galway senior camogie that just never got going, I’d make one recommendation (for what it’s worth!) to anybody who remotely thinks they’ll be involved with this team in 2019.

Get the DVD or watch it on RTE Player – last Saturday’s All-Ireland senior semi-final.  Watch it in full!  Don’t wait to lick wounds or feel sorry for yourself!  Watch it in full and then burn it (delete it or whatever is appropriate) and never mention it again.

It was one of the worst games of camogie I have ever witnessed negated by defensive tactics, nerves and sloppiness.  But sadly, it probably was a fitting finish to a year where Galway camogie couldn’t get the finger on the pulse.

We’re not going to recycle old ground about managerial changes, the departures of Mark Dunne and Tony O’Donovan, or how we have found ourselves trailing by a decent distance behind the Camogie Association’s Proclaimed ‘Big Two.’

2018 has passed us by!  It’s what happens now that will determine whether Galway are entering a period in solitude or can they bounce right back.

Last Saturday felt like the end of an era but it should by no means be seen as suggesting drastic changes in playing personnel.  And definitely not management personnel.

To wrap up the managerial one quickly, if Galway camogie changes the manager again, we might as well fold the tent and go home!  If that happens, players should retire and the executive should resign!

Keeping Cathal Murray at the helm is vital for any progress or what was the point in the sweeping changes that blew through Galway camogie last winter?

Anybody who instigates another change in management has no place being involved with Galway camogie!

The reality is Galway have allowed themselves start to accept they are not as good as Cork or Kilkenny.  It’s a mental thing and enough defeats will create doubt.    I mentioned the ‘Big Two’ already.  That would drive me mad if I was involved!

It will be a long winter for the Tribeswomen but redemption will be sweet if they pick themselves up and say enough is enough.  If I remember correctly, there was talk of camogie staring into the abyss after an abject 2012 All-Ireland semi-final outing against Cork.

There’s a new executive bringing fresh ideas to Galway camogie.  There’s a management team that will benefit from a pre-season to put the maroon and white back on the front foot.  And there are players, young and experienced, that still have so much to offer.

I’d be very disappointed if any senior player retires from the set-up as their contributions still vital.  You only have to see the latest Galway Daily polling to back that point up.  And Therese Maher was two years older than any current player when she got the O’Duffy Cup.

There a group of now experienced players (maybe three years younger than the aforementioned) who have pockets weighed down by All-Ireland medals at underage as well as 2013.  It’s their time to step up and lead like Ryan and Co did five years ago.

And there’s probably the most naturally gifted pack of Galway players ready to emerge over the next few years and they need to be minded.  In our intermediate analysis, we’ve already spoken about that.  Galway still have time and even if it doesn’t happen in 2019, it can happen in 2020!

That’s the question now!  After one of our most disappointing years in recent memory, are we willing to roll the sleeves up and rebuild Galway camogie’s reputation?  Many, many people will ask themselves that over the next few months.

Stability is required.  And if the camogie association don’t look at their rule book, especially with the sweeper system riddling the game, there’ll be nobody going to watch All-Ireland finals soon!  But we’ll talk about that another day.

Galway are a county that can turn all that around and finally start bringing through the success their talents deserve.  Many felt the current generation would eclipse the class of 1996 but they haven’t earned the right yet.  But their exam isn’t over if they don’t want it to.

Firstly, let’s get that video watched and then have a bonfire and rid the evidence.  Let the hunger, the hurt, the disdain for those counties holding us back, seep through over the winter months.  And hit the ground running in 2019 with the Conquerors blaring in the ear – “Galway Are Back!”.”