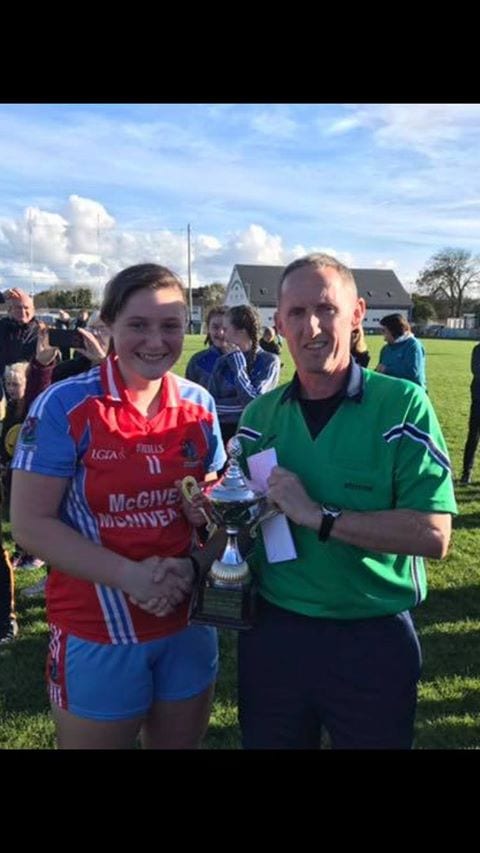 Monivea/Abbey won their first ever county under 14 A ladies football title last Sunday (14th October) after coming through Claregalway 3-8 to 3-5.

A cracking game that went to extra-time, the teams were finished level at 2-7 to 3-4 in normal time before Monivea/Abbey edged ahead.

After 20 mins Monivea/Abbey were 2-1 to 0-0 down. Tara Maher got the ball on her own 45 and ran all the pitch to get their first point. Then Lauren Keary added two frees and Niamh Burke put one over from 30 yards. At half-time, Claregalway led 2-2 to 0-4.

Monivea/Abbey started the second half with a point from Rachel Gannon and a goal from Keary to get back level. Then a point from Burke and Anna Murphy put them two ahead.

However, Claregalway responded with a deflected goal to retake the lead before adding two white flags for a three-point advantage.

But Monivea/Abbey wouldn’t be denied and in the third minute of added time, Keary got the ball on the wing and made a powerful run through the Claregalway defence before a thunder strike to the roof of the net to send it into 20 of extra time.

And Keary completed her hat-trick with the only score of first period of extra time. The second half was very defensive and Burke put over a point to put four between them. When Claregalway scored a free that was the last score. Monivea/Abbey won by 3-8 to 3-5.

It capped off a busy weekend of underage finals with eight titles decided. Naomh Mhuire, Salthill/Knocknacarra and An Spideal all secured cup glory. And there were shield successes for Bearna, Micheal Breathnach, Bearna and St. Mary’s.