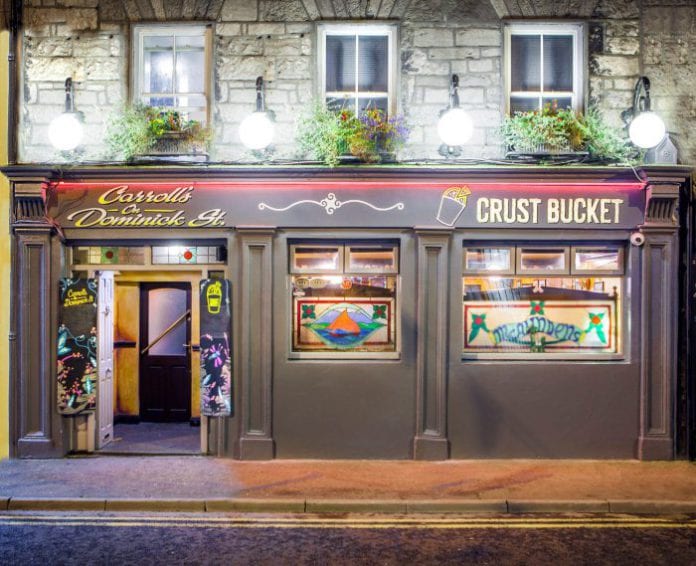 The Crust Bucket pizza restaurant on Dominick street has been named the best takeaway in Connacht at the Just Eat takeaway awards.

The Crust Bucket, found in the beer garden of Carroll’s Bar, was the only spot Galway in Galway to make the awards’ shortlist.

Established in by the owner of Carroll’s Bar, Darragh Mullin, in May of 2017, the shrugs at the convention that restaurants and takeaways should be in buildings.

It calls home a 20 year old, double-decker bus that’s been converted into a fully functional restaurant with a kitchen and dining area.

It seats 36 inside the bus, with room for more out in the beer garden.

The Crust Bucket’s signature dish is its namesake, cheese stuffed pizza crusts with dipping sauce in portions of 5 or 10.

It was nominated for Best Takeaway Pizza, but lost out to Firehouse Pizza in Ballymun, which was also named the Best Takeaway in Dublin and Ireland overall.

The best Chipper in the country is Macari’s in Tallaght, and Ireland’s favourite takeaway dish is officially the Spice Bag, as chosen by the people.

This is the fifth year running that Just Eat has asked the people of Ireland to pick their favourite takeaway outlets.

A public vote was held to name the best Takeaway’s in Ireland in 22 categories.

Along with the traditional Chipper, Chinese, and  Pizza places, newcomers like best Vegetarian and best Middle Eastern outlet were also chosen.

Those were won by Umi Falafel on Dame Street and Zaytoon on Camden street, Dublin respectively.

The full list of winners at the Just Eat National Takeaway Awards announced this week is: