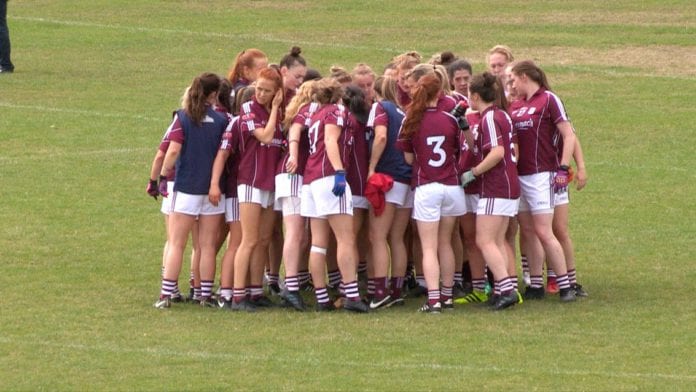 Following up from their 16-point dismantling of Waterford, Stephen Glennon’s charges put Leinster runners-up Westmeath to the sword setting up a Connacht Final rematch against Mayo on August 12th.

A Louise Ward goal after just 16 seconds and a Roisin Leonard strike gave Galway a 2-12 to 0-3 interval lead.  And the maroon and white (Westmeath wore green) kept punishing their opponents through two Leanne Coen majors and green flags for Sarah Conneally and Emma Reaney.

Galway wanted a good start but few could have imagined how good it would be.  Ward took possession from the throw-in before feeding Tracey Leonard.  The captain returned the ball to the Kilkerrin/Clonberne attacker who ran half the length of the field.

The visitors stood off and she finished for a memorable goal.  Tracey Leonard and Sarah Conneallly added minors to make it 1-2 to 0-0 inside just two minutes.  Westmeath were in for a disappointing hour.

Tracey and Roisin Leonard pointed before profiting from a poor Westmeath kick out on 10 minutes as Roisin walked the ball into the net.  Tracey Leonard (2), Aine McDonagh, Roisin Leonard, Coen (2), Conneally and Olivia Divilly  had Galway 15-points clear at half-time.

Coen pointed on 37 minutes before striking two majors to make it 4-13 to 0-3.  Her reward was to be substituted as Glennon looked at his bench.  The same fate fell on Sarah Lynch and Emer Flaherty when they picked up second half yellow cards while Nicola Ward was also dismissed for an early bath.

Aoife Connolly tapped over a Westmeath free on 41 minutes while Fiona Coyle also got on the scoreboard.  Ailbhe Davoren and Tracey Leonard put Galway 4-16 to 0-5 clear before they got the final two goals.  Conneally struck on 53 minutes before setting up Emma Reaney three minutes later.

Reaney added another minor on 57 minutes to conclude Galway’s tally.  Westmeath desperately chased a consolation goal and it finally arrived on 61 minutes.  Laura Lee Walsh’s distraction allowed Galway’s focus to lapse allowing Connolly’s delivery to bounce off the underside of the crossbar.

Maud Annie Foley kicked just over on 64 minutes for Westmeath’s final score but Galway had lost McDonagh to a shoulder injury 60 seconds earlier.  The two limp challenges provided by Waterford and Westmeath could leave Galway vulnerable but they can only beat what’s put in front of them.