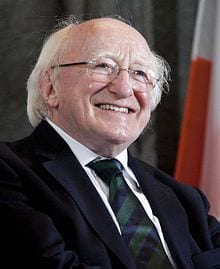 Day Three of the Galway Races were honoured with a special guest as President Michael D. Higgins was among the 17,000 visitors to enjoy the action.

The Limerick born statesman served as a TD in Galway West for 30 years only stepping aside in 2011 as he took his place in Aras an Uachtarain.

He faces a battle for re-election later in 2018 with Gavin Duffy, who came close to usurping him seven years ago, seeks support to officially register his candidacy.  And that allowed President Higgins to enjoy the evening and he presented the Galway Plate prize to Clarcam’s trainer and jockey, Gordon Elliott and Mark Enright.

He even found time to have a couple of words with Galway Bay FM’s George McDonagh and while not officially fulfilling media duties, did smile to assembled reporters saying he “always enter races in a very fit condition.”

There’s no doubt horse racing, an industry founded on the basis of gambling, wasn’t on his mind last week as he spoke about his concerns with gambling in sport, especially with the online market giving another avenue to young people to become hooked.

“If I had my way,” said President Higgins on RTE Radio after attending the Cork vs Limerick All-Ireland hurling semi-final last Sunday (29th July).  “I wouldn’t have advertising or any access to gambling platforms in sport at all. I really worry when I read the cases.

“I think in a way we should protect our sports of keeping them free from this kind of stuff.

“It’s not for me as President as I’m no influence except to say what I think, is that the integrity of sport means having care for everyone who participates.

"If I had my way, I wouldn't have advertising of any access to gambling platforms in sport at all.” President Higgins speaks to @Darrenfrehill on @sundaysport https://t.co/jG2bNU4ahE pic.twitter.com/liNvmbCH8P

“Having care for everyone who participates means not exposing them when in fact they are vulnerable. How you deal with vulnerabilities is by preparing them of course.

“But you can’t do everything through education. For too long in Ireland we often ignore problems that are staring us in the face.”

Anything up to 40,000 people are expected to descend on Ballybrit today (Thursday, 2nd August) fo rthe fourth day of the 2018 festival.  The first of an eight-race card begins at 1.40pm with the feature – The €300000 Guinness Galway Hurdle Handicap – going to post at 4.35pm.