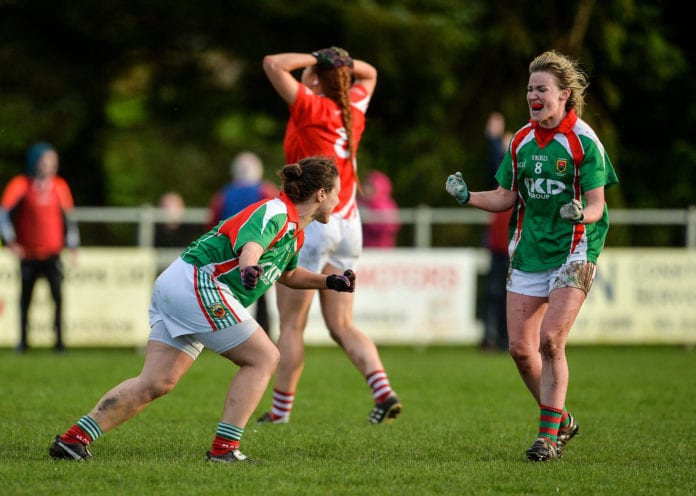 The eagerly awaited rematch between Kilkerrin/Clonberne and All-Ireland champions Carnacon will take place in Ballyhaunis on Saturday, 3rd November as the Connacht Ladies Football Association announced details on all three provincial deciders.

And a week later, late goals turned the replay on its head as Carnacon ran out 4-10 to 2-13 victors and took that form into the All-Ireland series when they were crowned champions in December.

Kilkerrin/Clonberne beat Roscommon’s KIlbride 8-19 to 0-3 in the Connacht semi-final and Carnacon were comfortable 9-10 to 0-4 winners against Knockmore in the Mayo final.

Their meeting is fixed for 3.30pm and will form part of a double header with the Junior Final as Galway’s Naomh Anna Leitir Moir take on Sligo’s Tourlestrane at 1pm.

The Connemara outfit held off a St. Dominic’s comeback in the semi-final after seeing a seven-point lead vanish.  County star Sarah Lynch stepped up with the final kick to put a 45 metre free over the bar.

And on Sunday, St. Brendan’s chase a first Connacht Intermediate title since 2001 when they take on Mayo’s Westport in Fr. Gibbons Park, Claremorris at 12pm.

Michael McHale’s team needed two attempts to get past Tuam/Cortoon in the county final before beating Sligo’s St. Nathy’s 2-6 to 0-5 in the semi-final.  Westport needed a free taking competition before finally getting the better of Roscommon’s Tulsk.

The winners will play in the All-Ireland semi-finals on November 17th/18th.  Connacht will have senior and intermediate home games against Munster and Leinster respectively.  The Junior winners will have to travel to a Leinster venue.