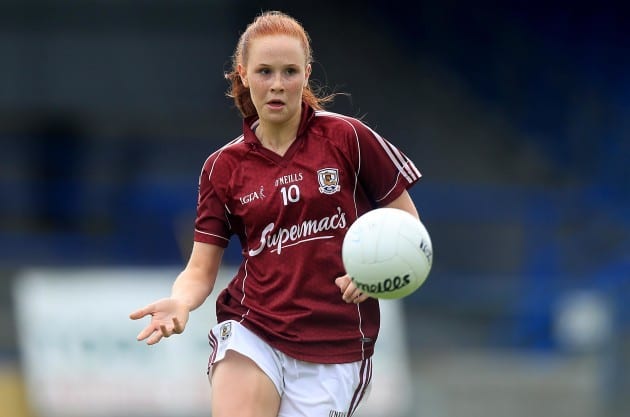 Three minutes hadn’t even elapsed when they were six points clear – two goals taken from two lively forwards who had productive afternoons.

Lynsey Noone started a competition with her sister Eva as they both finished with 2-1 but it was Olivia Divilly who led the six-in-a-row charge.  Her goal after 80 seconds set up an afternoon where she finished with 2-9 including a long range second strike before half-time.

“After last weekend, we’d a lot of questions to answer,” said Divilly afterwards as her contribution saw her recognised as the Player of the Match.  “We knew we really underperformed last weekend.  And we were really motivated to get a good start today and then just keep pushing on throughout the game.

“I think from the start, we were really focused.  Training has been going really well for the last month or two.  Although last weekend we didn’t perform, I feel we had the opportunities.

“We missed a penalty against Claregalway (and) they got a goal.  I think this weekend from the start, we were really motivated to get a good start.

“Corofin have top class forwards and what we were hoping to do today as push them upfront so they wouldn’t be getting a supply of ball.  I suppose they really showed the ball they did get, they really did punish us.”

The Galway attacker didn’t miss the chance to remember those who couldn’t take the field today and she was very cautious about the mention of Carnacon, knowing there’s plenty of hurdles before that potential Connacht Final rematch becomes a reality.

“I suppose a big factor as well,” added Divilly.  “Apart from wanting the six-in-a-row, we have Nicola Ward who has been out with a knee injury.  We want to keep going so we get her back so to give her some more action.

“And Chloe Miskell got a red card last weekend as well.  There were girls on the sideline that we really wanted to do it for today.

“Maybe, we’ll see,” she said carefully when Carnacon was mentioned.  “We’ll see.  I don’t know if they’re out of Mayo yet but I’m sure they will be.”