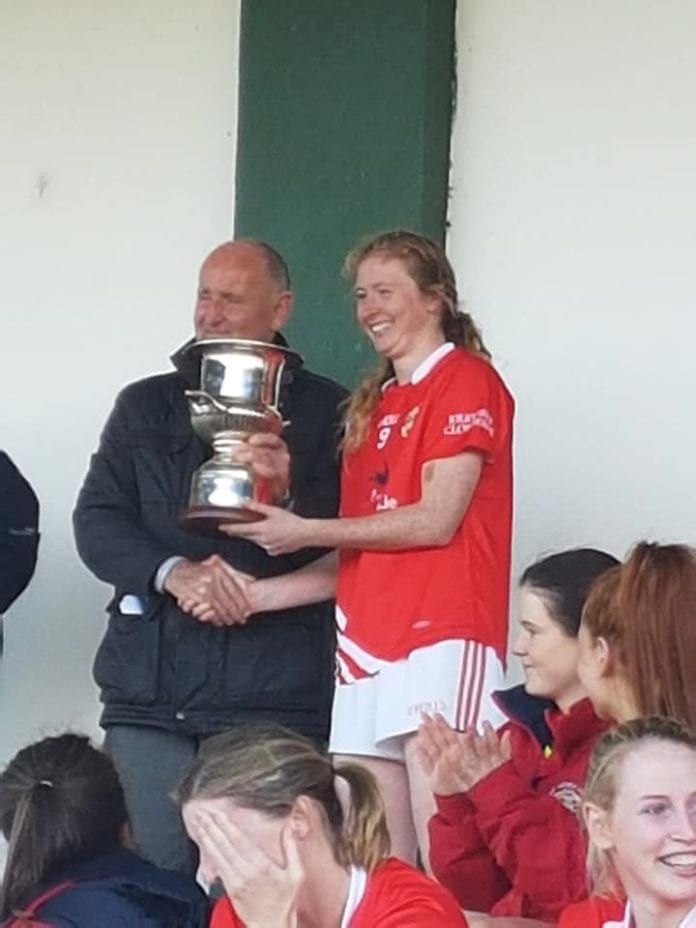 After another county title success, you’d imagine this scenario was becoming routine but Kilkerrin/Clonberne were delighted with their performance.

Kevin Reidy’s charges knew Corofin carried a serious threat to their dominance and the red and white were leaving nothing to chance.  Two goals in the first three minutes allowed them hold the red button deploying at will.

Olivia Divilly and Lynsey Noone were the first half goal scoring heroes getting two apiece giving the victors a 4-7 to 1-3 interval lead.  And while not getting on the scoreboard herself, Louise Ward was very happy with her team’s effort.

“We’re delighted with this,” said the Kilkerrin/Clonberne captain.  “We knew last weekend that we underperformed and we were going to have to up it again today.

“So, we went back training and focused on things we didn’t do well last week and thank God, we put in a performance today that we were happy with it.

“We probably didn’t run off the shoulder or together as much as we wanted to (in the semi-final).  So, we wanted to get that right today and at times, our transition from defence to attack last week was too slow so we were allowing Claregalway to get back.

“That was a few things that we looked at during the week and aimed to get right for this game.  We were happy with our execution of that today.

“We wanted to put Corofin on the back foot straight away and we know we have pace in our squad.  That was something that we had mentioned before the game, going at them from the throw-in.  I know I went through in the first half and I missed.

“But yea, the goal came then, I think 80 seconds afterwards.  Look, we were just trying to go at them from the beginning and it seemed to work.  So, we’re happy.

“All of our girls are well able run off the shoulder,” added Ward when asked about their half backs pushing forward which included Lisa Gannon setting up Siobhan Fahy for a point.  “They’re all well able to take the ball on.  They’re very, very good individually and technically as well.

“I wouldn’t be saying any of them can’t go up there and get a score and Corofin did try and block us out.  But we just kept the ball in possession moving it around.  And when the gaps came, the girls broke through and put it over the bar.”

Kilkerrin/Clonberne added two more green flags within the first two minutes of the second half to put the contest without doubt.  Maeve Flanagan finished off the move involving Siobhan Divilly and Ward before Eva Noone got number six.

“As I said, that was the plan from the throw-in,” added Ward about Flanagan’s goal.  “It didn’t work out in the first half but Maeve stuck it in the second half.  We’re delighted with it.”

“It’s something that we’re going to have to look at,” concluded the Galway midfielder about her team conceding three goals.  “And probably at times, we did fall asleep when they did breakthrough for the goals.

“We’re going to have to go back and see what happened for them and obviously, keep our attention on the game for the full 60 minutes.”

Kilkerrin/Clonberne face Roscommon’s Kilbride in the Connacht Senior Ladies Semi-Final on the weekend of October 20th/21st.

Briain Kelly - September 30, 2022 0
This year Macnas are back with something big and different, with a Giant of Galway on the banks of the Corrib this Halloween. CON MÓR...