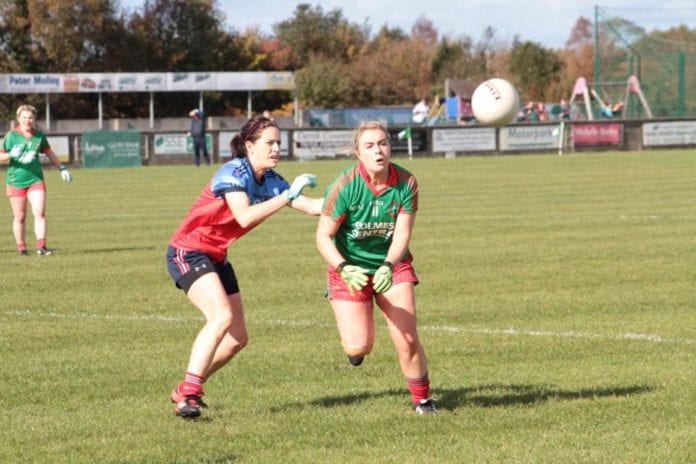 A communication mix-up didn’t spoil an exciting conclusion as St. Brendan’s and Tuam/Cortoon will meet again.  After Hazel Hevehan got a 58th minute goal, it looked like the Ballygar/Newbridge team were going to get over the line but frees for Aoife O’Rourke and Ciara Maloney restored parity.

Both managements thought there was four minutes of added time to be played and there was some dismay when referee John Devlin blew the final whistle after 63 minutes.  But few could argue that a draw was a fair result in this low scoring joust.

St. Brendan’s probably realised that poor shooting and wasted chances cost them as they hit 10 wides in the first half and also finding the woodwork three times.  They came in as marginal favourites against last year’s Junior A champions who were attempting to deliver back-to-back promotions.

That being said, Tuam/Cortoon weren’t overawed by this occasion and held their own in a competitive 60 minutes even if the scoring was scarce.  But Francis Roche’s team were much more economical and got the perfect start.

When Caoimhe Moran sent Emer Flaherty through on six minutes, she gained massive ground before offloading to Aoife O’Rourke for the opening goal.  And O’Rourke added a free 60 seconds later.  St. Brendan’s were chasing this game but on 13 minutes, a much-needed score arrived.

Rebecca Conway’s fierce strike rattled the net but it was their only first half score and two O’Rourke points gave Tuam/Cortoon a 1-3 to 1-0 interval advantage after being down to 14 players following Clodagh Creaven’s yellow card.  And Moran added a white flag on 36 minutes for a four-point cushion.

Laura Mulrooney and Conway came agonisingly close to St. Brendan’s goals before Niamh Lohan pointed.  Two frees by the three-quarter mark were converted by Nora Ward and the deficit was now just 1-4 to 1-3.

St. Brendan’s eventually got the crucial score as substitute Hevehan hit the net to put them 2-3 to 1-4 in front.  Tuam/Cortoon desperately battled to save their season and O’Rourke split the posts.  But when Maloney produced the same on 63 minutes, the sides were level again.