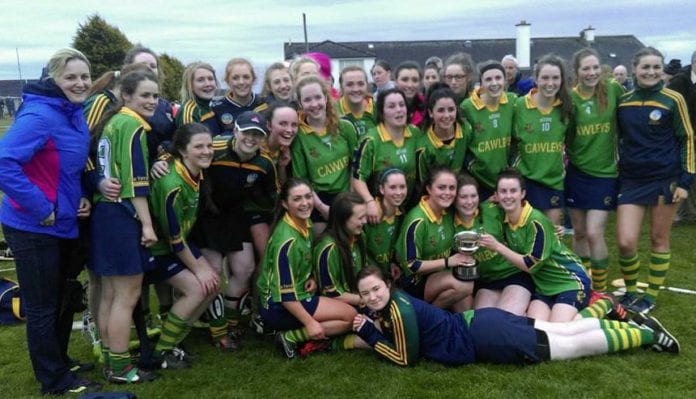 Sinead Gaffney’s goal just after half-time wrapped up this semi-final but Craughwell always looked the winning side as they qualified for a meeting with Carnmore.

Adrian McGrath’s team led 0-7 to 0-2 at half-time and saved a penalty but when Gaffney’s delivery dropped into the net 20 seconds after the restart, the league champions were on course.

It was disappointing for Ahascragh/Caltra who impressed this season and started strongly but their challenge faded during the second quarter despite a late rally.

CRAUGHWELL GET OVER THE LINE!#Duanes Intermediate @OfficialCamogie Semi-Final Latest in #Turloughmore

Leanne Freaney took advantage of the gale force breeze to land a free after just 30 seconds but it was Ahascragh/Caltra who led by the seventh minute.

Freaney restored parity but the game’s turning point was arguably on the quarter-hour.  Ciara Murray set up Aine Tully who was fouled for an Ahascragh/Caltra penalty but Warde’s shot was saved by Galway keeper Shauna Burke.

Craughwell weren’t taking advantage of the elements but they were lifted, along with their opponents struggling with their puckouts, and raced 0-7 to 0-2 in front at half-time.  Freaney, celebrating her birthday, put four over the bar before supplying Gaffney for the five-point advantage.

Freaney added two more white flags giving Craughwell a 1-10 to 0-5 lead with six minutes remaining as Ahascragh/Caltra desperately chased the game.  Rachel O’Connor had a shot saved and Noone’s free grazed the top of the crossbar for a point.

Megan Higgins finished a four-player move for another Ahascragh/Caltra point but the necessary goal never materialised.  They’ll be disappointed to see their year fade out after impressive wins over Kiltormer and Mountbellew/Moylough.

Craughwell are within 60 minutes of the double and unchartered waters for this young team plying their trade at junior level just three years previously.  And their league success will give them the belief they can play senior camogie.