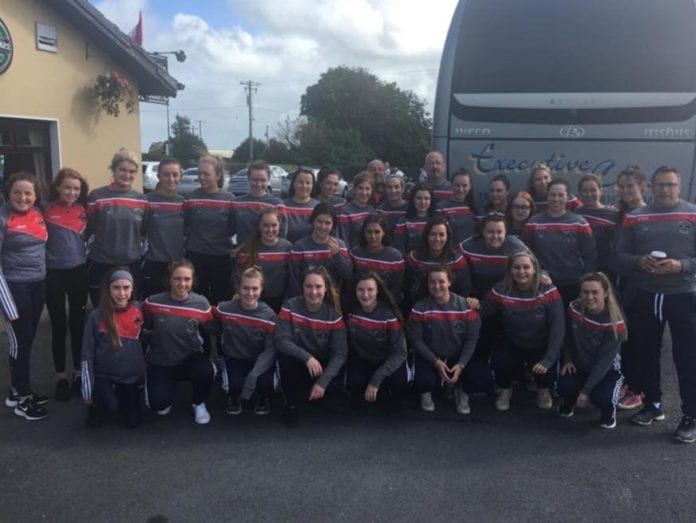 Carl Donlons’ team emerged 1-11 to 2-6 victors to set up a showdown with Craughwell but they played a memorable 80 minutes with their city rivals beforehand.

In the first of a double header, these teams couldn’t be separated even if both were on the verge of victory at different stages.

Carnmore thought they’d done enough in normal time until Castlegar pegged them back in the sixth minute of added time.  But in the second period of extra-time, Brendan Flynn’s charges were four clear but found themselves on the receiving end of a comeback.

Castlegar also had a penalty saved as Martina Finnegan was denied by Elaine Grealish with  Mary Lardner blocking a rebound while Emma Murphy was later blocked by Jennifer Davoren.  But despite not scoring from play, Finnegan and Lee left them just 0-8 to 0-3 in arrears.

Crowe converted the Carnmore point but the strong wind in Turloughmore played its part after the restart as Elisha Broderick, Lee (2) and Chloe Broderick left the minimum between them on 39 minutes.

Carnmore needed a lift and Fox deceived the opposing defence to land a speculative delivery into the net on 41 minutes but they only managed one more score through Crowe in the 60 minutes.

In a stop start game that witnessed plenty of frees (73 in total), Castlegar made hard work of chasing down the deficit with Finnegan (2), Katie Connell and Lee leaving them one behind.  But when Chloe Broderick found the target on 66 minutes, extra-time was inevitable.

The first period saw the teams level twice as Heffernan and Fox white flags were cancelled out by Murphy and Finnegan.  But it was a different sequence upon the change of ends.

Pressure supplied by Chloe Broderick, Murphy and Finnegan led to substitute Robyn Lyons arriving for a goal.  And when Chloe Broderick got her third point, Castlegar were 1-15 to 1-11 clear.

However, Carnmore ensured they stayed in the championship.  Crowe’s free was followed by Fox getting her second goal on 74 minutes to level affairs and set up the rematch in Loughrea the following weekend.

Carnmore finally prevailed to book their place in the final and move within 60 minutes of senior camogie.