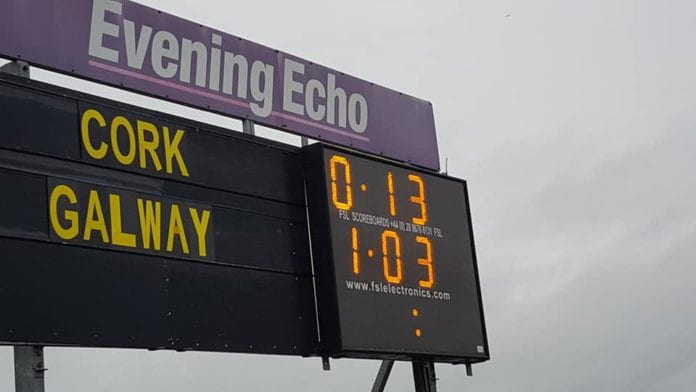 Galway’s camogie year started with defeat to reigning All-Ireland champions Cork on Sunday after they couldn’t capitalise on a strong start.

Ailish O’Reilly’s goal on six minutes gave the Tribeswomen a 1-1 to 0-1 advantage in the Cork Camogie Grounds but they only managed two Aoife Donohue scores during the remainder of the contest.

Cork sat back following initial pressure and moved the ball across the channels while suffocating the supply into Galway’s inside line.  Orla Cotter (0-7) and Amy O’Connor (0-4) were the Rebelettes’ chief scores as Paudie Murray’s team led by one point at half-time before pulling away in the third quarter.

“We’re disappointed how it finished out,” said Galway manager Tony O’Donovan.  “We started very well and we had the run on Cork for the first 10 minutes.  And they seemed to change tactics during the game.  We seemed to find it very hard to adapt to that.

“Things were going according to plan.  We are disappointed.  We missed scoreable frees; Cork didn’t as well.  There’s little things like that caused the backlog towards the end of the game.”

“The point at this time of the season is to give everyone a try out and we done that.  And we gave girls who hadn’t a game in two years a game today and it was great to see that.  The one thing (is) we kept trying until the end.  We didn’t give in.

“They (new players) performed well.  It’s great to see Siobhan Coen back and she hurled well for her first day back after her cruciate knee operation.  And it’s new again to Mont (Rachel Monaghan) and she done fine as well.  She kept trying and trying and trying and that’s what we want.

“And Caitriona Cormican had good work all the way through the game.  So, the new players that started done very well.  And we introduced Ava Lynskey and Ciara Murphy as well and Emma Helebert.  So, we’re happy with that.”

The Galway manager acknowledged that their tally of 1-3 will need improving but pointed out that it was very early in their preparations while they also lined out without 11 players including the Sarsfields and Athenry contingents and midfielder Niamh Kilkenny.

“The league has started very early this year and there isn’t a pitch to be got in Galway at the minute.  And that was shown.

“We’ve done a bit on astro (turf) and we’re very much involved in a strength and conditioning programme at the minute.  We’re eight weeks into that so that’s a lot of heavy legs going out on heavy pitches.”

Cork manager Murray was happy with the result and their tally of 13 points in the difficult conditions.

“The main thing for me during the National League, particularly after winning the All-Ireland last year was the attitude of the players,” said the three-time All-Ireland winner to Linda Mellerick in the Evening Echo.

“We certainly don’t want players getting carried away with themselves and I thought that side of things was very, very good.

“There is a good buzz about them and 13 points today with the rain that has fallen over the past number of days you’d have to be happy with it.

“We want a couple of players to be putting their hand up again this year and that’s what we’ll be looking for during the league.”

‘’If we can get two players out of the league it’ll be a success.”