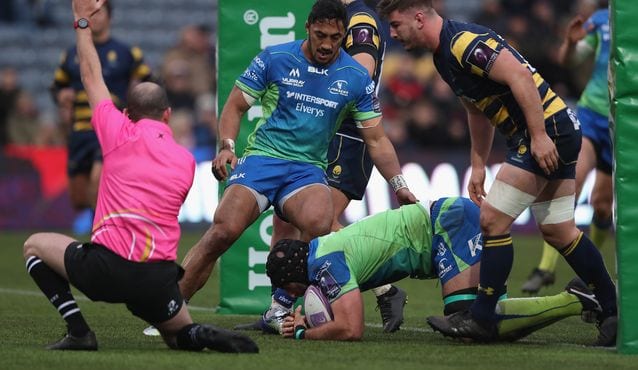 The drama didn’t stop in the Sixways Stadium for Connacht’s Rugby Team on Saturday as they had to endure a flight scare returning home to Ireland.

The @flybe aircraft that diverted to us on its way to Knock @irelandwest. Probs with flaps but landed safely. On board, the @connachtrugby team on way home after yesterday’s game against @worcswarriors pic.twitter.com/TjehiFHD80

Their Sunday morning flight from Birmingham to Knock was be diverted to Belfast Airport following a technicial problem that led to a five-hour bus journey home.

“Flybe can confirm that the captain of the above flight took the recommended action following a suspected technical fault during the above flight from Birmingham to Ireland West Airport Knock,” said the airline in a statement.

“And as an additional precautionary measure, elected to divert to Belfast International where the aircraft landed safely without incident.

“As is usual in such circumstances, the airport put its emergency vehicles on standby. All 62 passengers disembarked as normal when the aircraft arrived on stand following which they were transported by road to their destination.”

Pilot miss judges the landing for Knock airport(for whatever reason), then decides to miss Shannon/Dublin and land in Belfast. Yay 5 hour bus drive 😡😡

Then again thanks to the pilot who landed us safely. 🙌🙏 #grateful

Connacht had come from 12 points behind to rescue their European Challenge Cup tie on Saturday following a 24-24 draw with Worcester Warriors.

John Muldoon and Niyi Adeolokun overturned an initial 12-0 deficit inside four minutes but Connacht were under serious pressure at the break playing with 13 men after Quinn Roux and Jarrad Butler were sinbinned.

But they dug after the restart to avoid more concessions before Craig Ronaldson’s expert kicking and Tiernan O’Halloran’s try brought them all square.  Bundee Aki and Conor Carey also had tries disallowed with no television match official but the result was enough to clinch a quarter-final spot.

“The big issue is about how we dig these holes for ourselves and we are pretty good at it,” said Connacht coach Kieran Keane to assembled media afterwards.  “We just have to get things right otherwise we make it too tough and will probably lose.”

“Ironic, because we had two focus points prior to the game in terms of attack and defence, and one of them was to get out of the blocks really quickly. Instead, six minutes and we are down 12 points. We certainly didn’t roar out of the blocks as planned.”