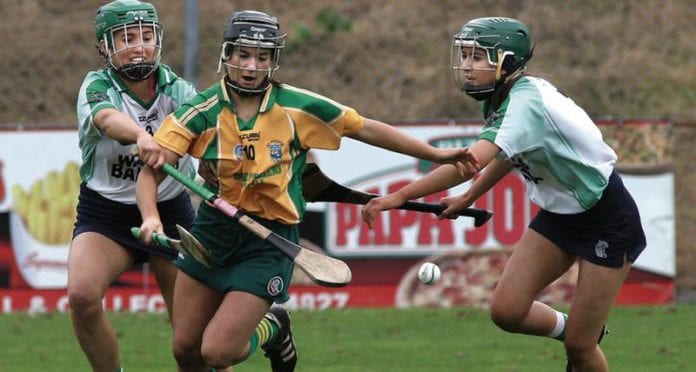 The draws for the county senior camogie semi-finals were made following Friday (19th October) night’s quarter-finals and paired the two teams that met in the last two finals.

Mullagh and Sarsfields will meet at the penultimate hurdle in 2018 after the latter took championship glory the last two years before contesting consecutive All-Ireland finals.

The other semi-final will see Ardrahan face St. Thomas.  Both teams have been knocking on the door the last few years since Ardrahan’s title win in 2013 and were the 2017 semi-finalists.

After the quarter-finals concluded, Sarsfields and Ardrahan took their places in the final four following impressive wins over Cappataggle and Davitts.

Michael ‘Hopper’ McGrath’s charges attacked early before building a massive lead in the opening game.  Cappataggle missed two chances before Orlaith McGrath opened Sarsfields’ account.  And when Cora Kenny’s goal made it 1-1 to 0-0, the victory looked on the cards.

Orlaith McGrath scored a stunning second goal on 24 minutes running half the length of the field before rattling the net as Sarsfields led 2-13 to 0-2.  And sister Siobhan scored the third goal 18 seconds after the restart in a 3-23 to 0-7 victory.

And three goals in three minutes ensured Ardrahan booked their passage to the penultimate hurdle as they ran out 3-12 to 1-6 victors over Davitts.

Brenda Kerins, Cliodhna Walsh and Dearbhaile Walshe gave Fintan McNamara’s charges a commanding advantage as they led 3-7 to 0-4 at half-time.  And with Rebecca Hennelly in control from placed balls and play, Ardrahan closed out the contest during the second 30 minutes.

The semi-finals are scheduled for Sunday, 29th October with details to be confirmed.  Both pairings previously met in the Senior A round-robin stages.

Mullagh beat Sarsfields 4-11 to 1-14 which will give them a boost ahead of the rematch.  While St. Thomas, still searching for their first final appearance, defeated Ardrahan 1-12 to 0-11.

The final is provisionally scheduled for Sunday, 11th November and the county champions will take on Ulster opposition in the 2019 All-Ireland semi-finals.