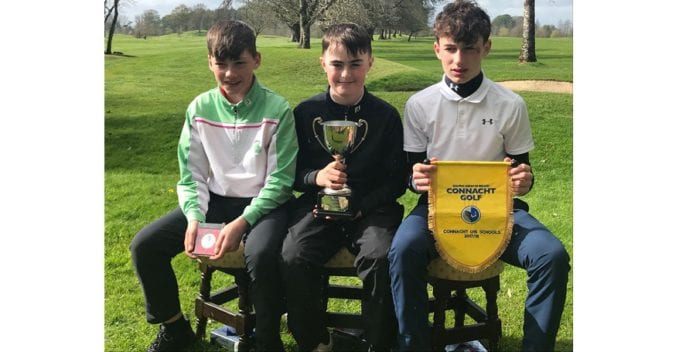 Challoner won the Ulster championship in June when he carded a +4 round of 76.  And at the beginning fo the month, he finished eighth in the US Kids European under 13 Open Championships at Musselbrough Golf Club in Scotland, joined by his reliable caddie – Dad Liam).

The Reid Trophy attracts a top-quality field of English and international players whose playing handicap is 7.4 or better. The 54-hole stroke play championship is played over three days. The full field plays 18 holes on each of the first two days. After 36 holes, the leading 70 competitors and ties qualify to play the final 18 holes on the third day.

While Challoner is covering the greens in Reading, his Galway Bay clubmate Cunningham will be heading north to Turnhouse for two days the following week (Monday, 13th August 2018) to compete in the Scottish under 14 Championship.

Four players have been named in the GUI squad for this event played over 36 holes with no cut: Sean McLoughlin (Co Sligo), Alex King (Faithlegg), LUKE CUNNINGHAM (Galway Bay) and Matthew Giles (Greenore).