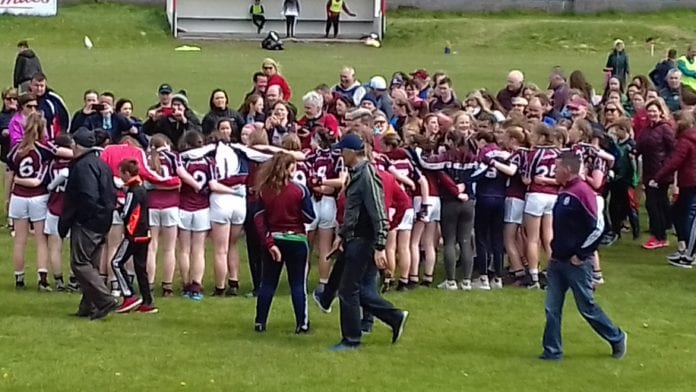 Galway successfully retained their Connacht title and kept their All-Ireland title defence on track in their opening game of 2018.

Three first half goals from Sarah Duffy, Gillian McGrath and Molly Mulryan gave the Tribesgirls a 3-7 to 0-2 interval lead before Mulryan and Eabha Ni Dhonncha added second half majors.

Mayo were Connacht ‘B’ champions and this was always going to be a serious step up though they were competitive in the opening stages with Sinead Walsh converting two frees.  And Walsh got a penalty in the second period before Niamh O’Malley got their second green flag.

Padraig Kilcommins’ team were expected to take time to settle having not played a competitive contest but they were a goal to the good inside two minutes.  Ni Dhonncha did the work that set up the chance for Duffy and she made it 1-0 to 0-0.

Galway nearly had a second when Marta Banek rattled the crossbar but they did stretch 1-4 to 0-2 clear in the first quarter with Duffy converting the four points.

Walsh was Mayo’s scorer while Mulryan hit the side netting for Galway.  But after Duffy’s fifth made it a six-point game, a poor kick out was capitalised upon quickly with McGrath getting the second goal on 22 minutes.

Mulryan did get her the third green flag giving Galway their comfortable half-time margin but Mayo were given a glimmer of hope three minutes after the restart.  Laura Moran combined with Clara Barrett to force the foul and Walsh made no mistake with the penalty.

That left Mayo’s deficit at 3-8 to 1-2 after McGrath pointed for Galway.  But the next three scores all went the Tribesgirls’ way including two goals.

After a Duffy free, Ni Dhonncha, Maebh Walsh were the provider for Mulryan’s second goal.  And Laura Scanlon’s run on 38 minutes gave Ni Dhonncha her major to put their opponents out of sight.

Walsh, Mairead Glynn and Ni Dhonnacha concluded Galway’s tally but Mayo did get another three-pointer 10 minutes from time as O’Malley spotted a gap and her low strike found the target.

Lillian Keane and Alannah Devereux got late Mayo points as they concluded their year.  But Galway are through to an All-Ireland semi-final against Ulster opposition on May 27th.