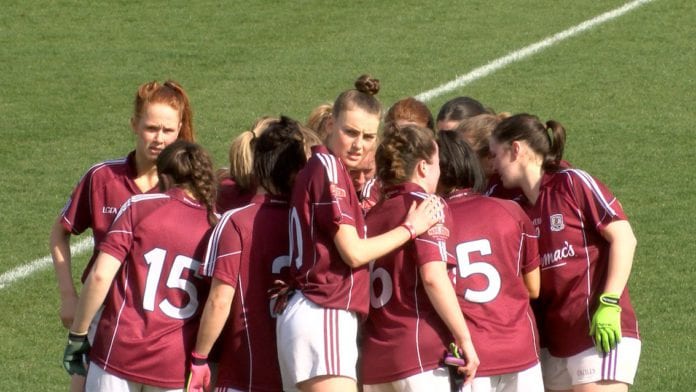 Galway’s league semi-final hopes are up in the air after this defeat on Sunday in Clonberne but they will qualify for the semi-finals should they beat Westmeath next week.

Dublin and Cork have reached the knockout stages leaving Mayo, Donegal and Galway to fight for the final two spots.

Mayo are on 12 points and will go through should they beat Monaghan while Donegal and Galway are locked on 10 points.

However, should Donegal and Galway win their final assignments against Cork and Westmeath, the Tribesmen will advance based solely on the fact that they kicked 16 white flags in their 0-16 to 1-13 draw with the Tir Conaill women in February.

Should only two teams finish level and head-to-head fail to separate the teams, the side who kicked more one-pointers get preference overing scoring difference.  Things will only get complicated should Mayo draw putting three teams on 13 points.

Two second half goals booked Cork their place.  An Orla Finn free on eight minutes gave the visitors the initiative as they went 1-6 to 1-4 ahead at half-time.  But Leanne Coen’s Galway injury time major had the Tribeswomen back in contention.

However, Cork pushed ahead again as a Finn free after the restart was followed by a second goal.  Marie O’Callaghan started the move involving Doireann O’Sullivan and Orlagh Farmer.  But as the opposing rearguard pushed up, O’Callaghan kept going receiving the final pass before rounding Lisa Murphy.

Cork were six up and maintained a 2-9 to 1-6 lead by 41 minutes as Doireann and Brid O’Sullivan scores cancelled out Galway efforts from Ailbhe Davoren and Tracey Leonard.  But when Leonard added two more and her cousin Roisin Leonard tallied, the margin was just one goal with 10 minutes remaining.

Brid O’Sullivan responded for Cork before the third goal.  Eimear Scally’s delivery got the slightest of touches from Ciara O’Sullivan to beat Murphy and Cork had their fifth win.  Finn got Cork’s last two points before Olivia Divilly kicked a consolation brace for Galway.

Finn opened after four minutes before Doireann O’Sullivan made it 0-2 to 0-0 and Galway’s first white flag came afterwards from Coen.  But when Finn’s free on eight minutes was dropped over the line by Murphy, Cork had a 1-2 to 0-1 lead they never relinquished.

Ciara O’Sullivan put five between them before Mairead Seoighe got Galway’s second.  Cork were the better outfit even though Galway were starting to create serious chances and Martina O’Brien was called into an important stop from Aine McDonagh.

The Clonakilty keeper also produced two top drawer saves from Sarah Conneally and Seoighe before half-time as Doireann and Aine O’Sullivan stretched Cork’s lead to 1-5 to 0-2.

Seoighe and Tracey Leonard reduced arrears but Galway were wasting chances.  Finn put five between them again before Galway were thrown a lifeline.  Divilly won possession starting an attack.  The ball was won by Seoighe outside the square who found Coen and the Corofin forward mad no mistake.

However, Cork’s 1-1 after the restart maintained their control before Ciara O’Sullivan’s goal secured the win.  They are into the semi-finals with Dublin while Galway will fight it out with Donegal and Mayo next week for other two spots.