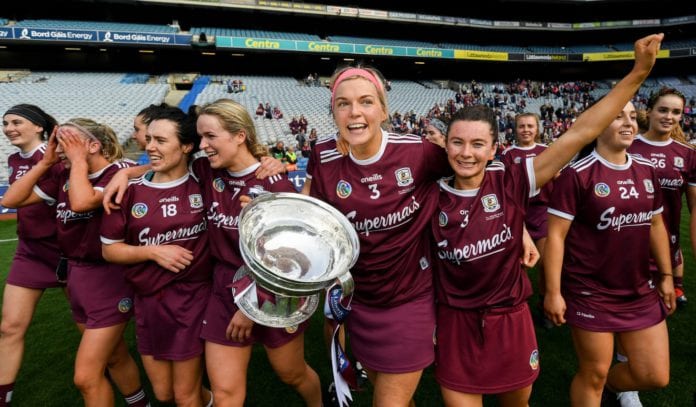 The shortlist for the fifth Camogie Association/WGPA Players’ Player of the Year Awards with women from Galway taking up a third of the list.

The Players’ Player of the Year Awards honour the outstanding achievement of an individual player in the Senior, Intermediate and Premier Junior Camogie Championships.

Sarah Dervan and Niamh Killkenny of the Galway Senior Camogie team have both been nominated for Senior Player of the Year along with Michelle Quilty of Kilkenny.

The Galway women defeated Kilkenny in the All-Ireland Senior Final earlier in September, and it looks like they’ll be facing off once again to see who is best.

Dervla Higgins, who plays for Athenry Camogie Club has been shortlisted for Intermediate Player of the Year.

She is running in that category with Pamela Greville of Westmeath and Sabrina Larkin from Tipperary.

No Galway players made the shortlist in the Junior Player category which is comprised of Patrice Diggin (Kerry), Sara Murphy (Kerry), and Rebecca Noonan (Limerick).

The winner of will be announced on the night of the 16th annual Camogie All-Stars Awards on October 19 at the Citywest hotel in Dublin.

Camogie Association President Kathleen Woods said: “The Players’ Player of the Year Awards are unique and prestigious honours for any player as they recognise the esteem in which players are held amongst their peers”.

She added that they are delighted to join with the WGPA and Liberty Insurance in “acknowledging these outstanding players in what was an exceptional season”.

Chairperson of the WGPA Maria Kinsella congratulated all the players who made the shortlist, saying that it is a well-deserved recognition for an incredible season’s work.

“The Players’ Player of the Year Award is a special honour for our nominees with unique recognition from their peers.”

“Best wishes to all of the nominees and we hope everyone has a brilliant night of celebrations at the All-Star Awards.”