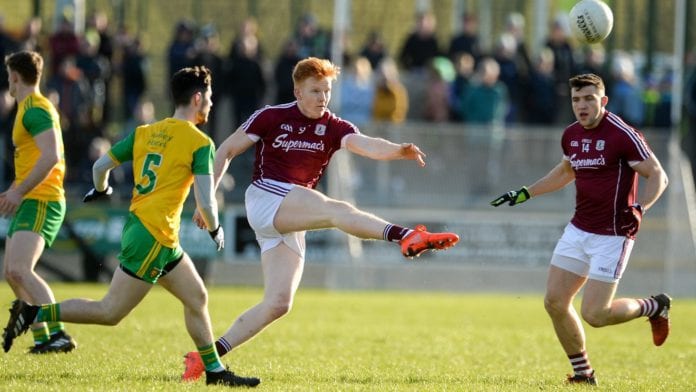 Galway football fans were delighted with their team’s one-point victory in Letterkenny on Sunday as the Tribesmen looked to establish themselves among the game’s elite.

Great result up in Donegal today. 4 points on the board already . Next weeks clash with @MayoGAA will be tantalizing!! @Galway_GAA

A lot of miles covered this weekend from Castlebar to Letterkenny watching 4 Div 1 teams – Mayo laboured, Kerry’s young guns very impressive, Galway with Walsh and Comer effective and Donegal are work in progress but Paddy McBrearty is different gravy.

Young and old alike were engrossed in a compelling contest even if some weren’t overly thrilled by the fare on offer.  While one put in perspective the long journey away supporters put in to follow their teams compared to to those with bigger more important battles as part of their every day life.

"SHOOT, SON!" shouts the 6yo at the Donegal v Galway match. A 6yo and simultaneously a 60yo

Met a @Galway_GAA fan today who travelled from Clifden to Letterkenny! Some return trip for a game. Makes u pity cancer patients who regularly have to do it from Parts of Donegal. #AllianzLeagues pic.twitter.com/necJjzv24u

After the weather we’ve endured in recent weeks, the state of the roads didn’t go unnoticed with Galway fans having to be wary with some of the road conditions on the four-hour journey.

Travelled from Galway to Donegal this morning and no grit on the Ballindine to Charlestown road in Mayo. @MayoCoCo are ye hoping someone dies .#shameful @rtenews @FineGael