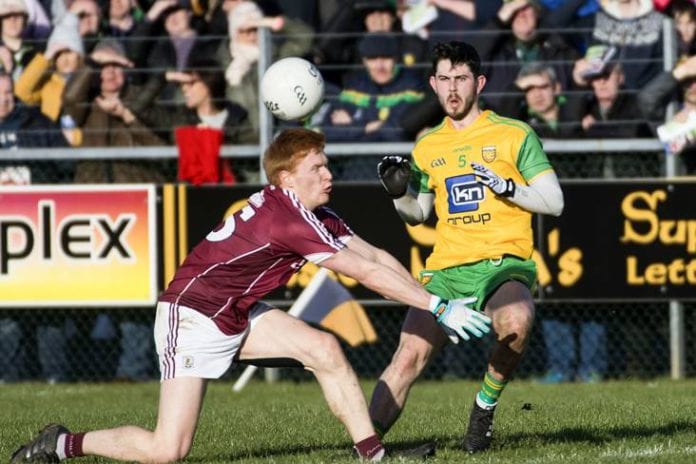 Galway made it two wins from two in Letterkenny on Sunday as they went second in the National Football League Division One just behind All-Ireland champions Dublin.

Sean Armstrong, just six minutes after being introduced, kicked the winning score from 35 yards to secure another victory over Ulster opposition and put the Tribesmen in prime position to preserve their top-flight status.

After beating Tyrone seven days earlier, the trip to the North West was expected to be a tight despite Galway winning by 15 points when these teams met in last year’s championship.

But Galway were in the driving seat on 15 minutes when Eamonn Brannigan finished past Peter Boyle for the first goal and a 1-3 to 0-3 lead following Declan Kyne’s assist.

The maroon and white led 1-7 to 0-8 at half-time with Shane Walsh producing a dominant display at centre forward getting three first half scores.  But Patrick McBrearty was in equally superb form keeping the Tir Conaill men in contention with his nine points over the hour.

Donegal had lost by one point to Kerry the previous weekend and needed a result before their visit to Croke Park next Saturday.  They finally gained an edge seven minutes after the break as Patrick and Stephen McBrearty, along with Odhran MacNiallais put them 0-12 to 1-8 ahead.

Walsh replied with two more minors as the lead shifted between though Galway did come close to second goal earlier when Damien Comer’s goal effort with venom was deflected over the bar.

Ciaran McGinley and Ryan McHugh gave Donegal back the advantage leading 0-14 to 1-10 before Walsh’s sixth levelled affairs.  An away draw wouldn’t have been a bad outcome for Kevin Walsh’s men but their growing maturity to get on the right side of tight encounters was rewarded.

Armstrong found the target to give Galway a one-point victory and if they can maintain their recent winning record against Mayo in Pearse Stadium next Sunday (11th February, 2pm), the Tribesmen will have guaranteed they remain a Division One team in 2019.

Shane O’Mahony wrote in the Irish Sun – “A back and forth contest saw the sides exchange the lead throughout a hard fought second half but Armstrong’s left Donegal one point losers for the second week in a row.”

The Irish Times said – “The game was on a knife edge, with just a minute to go, when the experienced Armstrong, on the field only a matter of moments, found a way to arch over the match-winner from 35 metres to make it two from two for the Tribesmen.”

Alan Foley for the42.ie wrote – “A POINT ONE minute from the end by substitute Sean Armstrong meant Galway pipped Donegal in a frantic Allianz League Division 1 clash in Letterkenny.”