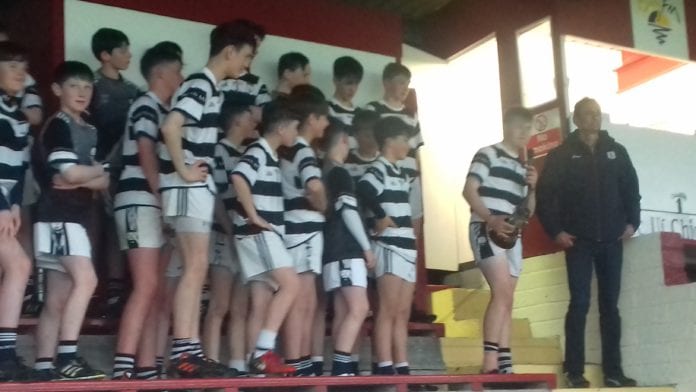 The county championship couldn’t have had a more dramatic finish as Turloughmore completed a domestic double thanks to a winning goal seven minutes into injury time.

These teams met in the Feile Final with Turloughmore comfortable winners but there was nothing relaxing about this as Declan Kearney’s team desperately chased a saving score.

After Matthew Tarpey delivered from a 45 thanks to the pressure the north Galway team were applying, a packed square made it hard to see the sliothar but Owen Kearney got the slightest of touches to get the goal and shatter Clarinbridge’s dreams.

Clarinbridge weren’t lacking in motivation and showed their intent within 47 seconds as Aaron Niland converted a free.  And they doubled their advantage on four minutes with Darragh Counihan and Mikey Fallon setting up Colin Counihan.

Turloughmore finally got off the mark on seven minutes through Eoghan Conneely but they ran up seven first half wides which put them on the back foot.

And Clarinbridge made it count on 11 minutes with Sean Fox perfectly placed to hit the net.  And the centre forward also won a free two minutes later which Niland registered to put five between them.

It didn’t look fathomable at the time that Clarinbridge wouldn’t score again and they still looked commanding at the break leading 1-3 to 0-2 despite Conneely reducing arrears.

Turloughmore captain Darragh Walsh had an eventful second half and picked up an injury following a chop but somehow managed to stay on the field.  Play was held up significantly for the centre back resulting in the added minutes at the finish.

Scoring was scarce but Turloughmore won a close in free eight minutes from time but Walsh, now playing at full forward, opted to go high.

They had time and Conneely got his third white flag on 38 minutes.  Turloughmore chased the game during injury time and Cillian Trayers did pick out Tarpey for a point.

One last chance at forcing a replay went a begging though they did win a 45.  Tarpey sent the ball into the danger area and when the dust had settled, Owen Kearney’s touch delivered a sensational result and shattered Clarinbridge hearts.