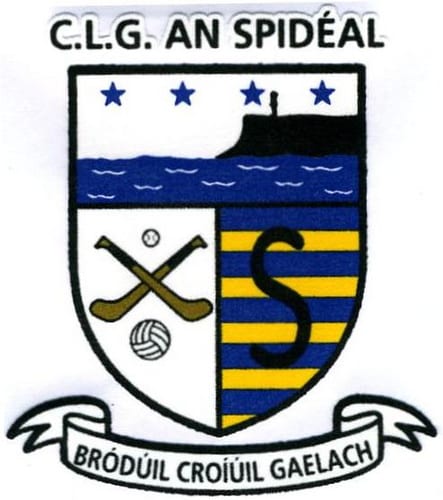 Two goals for Criostoir O Marta and Liam O Conghaile secured An Spideal top spot in Group 2 of the intermediate football championship in Corofin and a meeting with Menlough.

The west Galway side survived goal threats either side of half-time from St. Brendan’s to finsih their three games unbeaten as their opponents were already destined for the relegation play-offs.

With Micheal Breathnach getting the better of Oughterard, they took the runners-up position but An Spideal manager Micheal O Duinn was happy enough.

“We are very happy with that now,” said O Duinn afterwards.  “We know Ballygar (St. Brendan’s) are a tough and physical team.  We just wanted to come here today and get a win.

“We were carrying a few injuries.  We’ve three or four lads out.  We just wanted to go at them and just come out of here with the win.

“I wouldn’t be that happy (with some early misses).  But the pleasing thing about it, the subs that are coming in for the last two championship games, they really are stepping up.  We’ve a strong enough panel now for the quarter-finals.”

O Conghaile wasn’t long on the field when the netted the 63rd minute second major after O Marta had given them a 1-9 to 0-5 interval lead.  And the supplier for O Conghaile’s strike was another replacement Stiofan O Fatharata.

“But’s that what they’re (substitutes) doing,” added O Duinn.  “They came in, 3 subs came in against Oughterard and they scored two points.  Against the Breathnachs (Micheal Breathnach), they scored three points.  So, it’s pleasing lads coming off the bench and doing their job.

“We have to tighten up in the backs there a bit (following four St. Brendan’s goal chances).  But we’ll work on it for the next two weeks.

“They’re all good teams left.  There’s no easy team there.  But look, we’ll be ready for it.”

An Spideal face Menlough in the quarter-finals of the 2018 Claregalway Hotel Intermediate Championship on Saturday, 22nd September.  Throw-in at Pearse Stadium is 3pm.