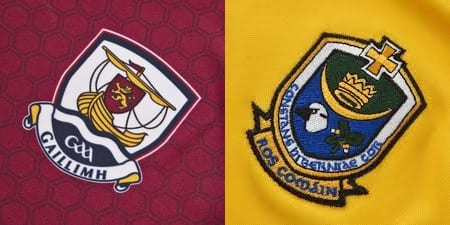 Galway kicked off their Connacht Minor Football Championship with an emphatic win over Roscommon to begin the new round-robin series.

In the first year of the new under 17 structure, the Tribesmen showed patience in a tight opening half before goals for Matthew Cooley and Aidan Halloran gave Donal O Fatharta’s team a 2-5 to 0-5 interval advantage.

And even though Liam Ormsby reduced arrears just after the restart, another 2-9 unanswered ensured Galway laid down a marker with Cooley and Halloran again adding the green flags.

Aaron McDermott opened for Roscommon from a placed ball before Ryan Monahan levelled matters on 10 minutes.  And this was the theme of the opening 30 minutes.

Ormsby and Eoghan Derwin kicked Roscommon scores in the first 15 minutes but the maroon and white always had an answer with Paul Kelly and Oisin Gormally on target.

After good work from Cooley, Kelly gave Galway the lead for the first time on 17 minutes before Shane Cunnane restored parity.  And they were level again when Derwin and Monahan traded minors before Galway put distance between them.

Cathal Sweeney, Sean Black, Tony Gill and Halloran were involved as Daniel Cox won a penalty which Cooley converted.  And before the half-time whistle, Halloran came in from the right for a second to give Galway their six-point cushion.

Halloran and Cooley added points before getting goals to make it 4-9 to 0-6 on 42 minutes.  Further white flags for Cox, Halloran, Gormally (2) and Tinney had Galway 20 points to the good.

James Fitzpatrick arrested the slide for what proved to be Roscommon’s final point on 52 minutes.  Gormally, Conor Raftery, Monahan and Cox rounded out a comprehensive result.