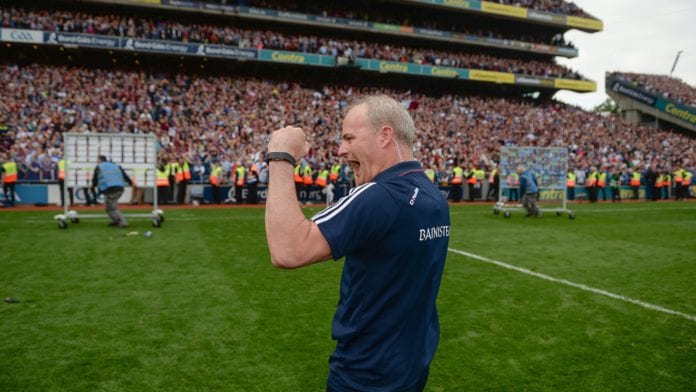 Galway’s defence of the All-Ireland senior hurling championship is up and running after they defeated Offaly in their Leinster championship opener on Saturday (12th May).

Debutant Brian Concannon got two goals with Joseph Cooney, Conor Whelan and Jason Flynn also netting as the Tribesmen struck five majors in a championship match for the first time since 2015.

They struck two goals against Dublin the provincial quarter-final in 2017 but never raised a green flag again.

“It was obviously something we were conscious of last year,” said manager Micheal Donoghue to Kevin O’Brien from The 42 afterwards.  “It wasn’t that we weren’t creating the goal chances. It is a work-on. Ye boys (the media) keep highlighting it as well for us.

“With the forwards we have they are well capable of creating goal chances. Today we were just lucky that the boys took them.”

Next up for Galway is Brian Cody’s Kilkenny who survived a scare in Parnell Park on Sunday to come through 1-25 to 3-16.  And it promises to be a special occasion as Pearse Stadium finally hosts a provincial encounter.

“That’s just the draw,” added the Clarinbridge man when asked about his team having a bye next week.  “We have three on the spin then. It’s the same for everyone really. We’ll look forward to bringing Kilkenny to Galway.

“We’d worked hard to get up to a level on the training ground. Our own internal games, we needed that competitive game to get us up another notch. Hopefully that will stand to us the next time.”

Galway face Kilkenny in their second game of the 2018 Leinster Senior Hurling Championship on Sunday, 27th May.  Throw-in in Pearse Stadium is 4pm.