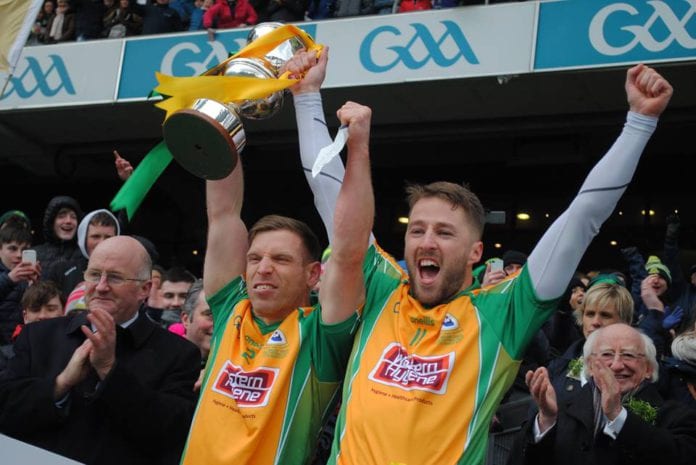 Sice and Michael Farragher hit first half majors while Martin Farragher chipped in with six points from play to ensure the Galway champions were never under any serious threat.

Corofin are waking up as All-Ireland champions this morning after yesterday's devastating display of attacking football that simply blew Nemo Rangers away. #TheToughest pic.twitter.com/pU2XCGTLr9

It continues a 100% record at GAA headquarters for Corofin who came through tight battles against Annaghdown, St. Brigid’s, Castlebar Mitchells and Moorefield before this breathtaking performance validated their place as one of Ireland’s top clubs.

“We all know what Nemo are,” said Sice to the Irish Times afterwards.  “They are a superpower and that is not being anyway smart or condescending. They are.

“It’s just nice to get an All-Ireland against those guys and to recognise that we beat one of the top dogs.”

Corofin’s win in 2015 allowed them join the men of 1998 but the current crop always felt there was more in them.  And Sice agreed that would have been their goal even after their loss to Dr. Crokes in last year’s semi-final.

“We knew was coming up talent-wise,” added Sice.  “We had a lot of young lads on the field today. Myself and Kieran Fitzgerald are the elder statesmen.

“We knew we had a great group there and we just had to keep them all together. They went out there and they did justice to themselves there today.

What impressed those in attendance was how Corofin went on the assault from the word go and never relented over the hour.  They led 2-9 to 0-5 at half-time and still outscored Nemo Rangers 0-10 to 0-5 in the second half.

Masterclass of Gaelic football today x Corofin. Sensational passing & link play all over the field from the "get go". Nemo had no answer. Michael & Martin Farragher were red hot…. V proud of my 3 nephews. Well done to the entire squad. #GAA #AIB pic.twitter.com/cXFLv22C6X

“It’s something we try and instill from an early age,” said manager Kevin O’Brien to John Fogarty in the Irish Examiner.  “Those people that follow us a lot in Galway will see that week-in, week-out in league games.

“We try to move the ball, give it to the better player and if the long ball is on sometimes we give it but we prefer to give it short and plenty of movement coming off at angles.”

And Martin Farragher’s contribution wasn’t lost on the Corofin manager.  The forward was sent off after just 76 seconds of the semi-final win over Moorefield but contributed six points from play as they got their hands on the Andy Merrigan Cup.

“He was outstanding,” added O’Brien. The sending off was unfortunate but the way he conducted himself and looked after himself after the last number of weeks – we kinda knew the decision was going to be overturned – Martin was very focused and fair play to him for that.

“In ‘98 when we won it, we didn’t think it would another 17 years before we came back again and it was important for this group to win the first but they’re a group that wanted to win two, maybe three titles. They’ve done that now and I think that’s put them up with nice company in third place in the roll of honour.