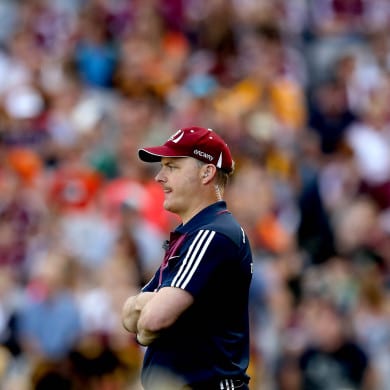 Galway’s senior hurling team gave an emphatic response to any doubters on Sunday (8th July) when they successfully retained the Leinster title for the first time ever.

A Jonathan Glynn goal helped Micheál Donoghue’s charges to a 1-15 to 0-6 advantage but they had to show their mettle when KIlkenny stormed back thanks to goals from Ger Aylward, Colin Fennelly and Richie Hogan.

However, the Tribesmen finished strongly in Semple Stadium to run out 1-28 to 3-15 winners and will now meet Clare or Wexford in the All-Ireland semi-final on 28th or 29th July.

“All credit to Kilkenny for coming back,” said Donoghue to John Harrington from gaa.ie.  “But our boys showed no panic, their use of the ball, their determination and quality and bravery to use the ball at that stage was very evident.

Micheal Donoghue delighted with the character shown by his @Galway_GAA team in a thrilling @gaaleinster Final replay against @KilkennyCLG at Semple Stadium!

“Look obviously just delighted now to get over the line.

“They totally understand the responsibility that goes with wearing that jersey. We got off to a massive start. We knew after last week, we’d have to try to impose our own game on it.

“They done that brilliantly. But look testament to Kilkenny, they came back in total Kilkenny fashion and style. It was some game and some game for us to win.

“We said many times; no two games are going to be the same and they’re never going to be. Obviously after last week, I said immediately after, there were some elements of the game that we weren’t too happy with.

“Some of it Kilkenny forced upon us, so we knew we had to come out of the traps early. Look the lads, it is really hard and people mightn’t comprehend how hard it is to turn around in seven days. So, the first part of the week is just about recovery.

Galway meet Clare or Wexford in the 2018 All-Ireland Senior Hurling Semi-Final on Saturday, 28th July or Sunday, 29th July.  The game will throw-in at Croke Park at a time yet to be determined.