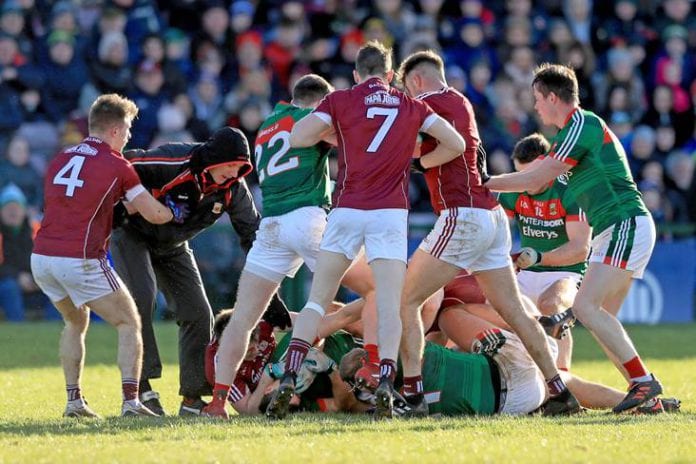 There was only one talking point around the GAA community after the weekend and that was the brawl (or ‘handbags’ as Kevin Walsh described) that occurred near the end of the Galway vs Mayo match.

Three players were sent off, Cillian O’Connor got a straight red and the Tribesmen secured a fourth consecutive win over their neighbours.

The love/hate relationship between Mayo and Galway is……. complicated. #galvmayo pic.twitter.com/J2eOq2TYGD

Terms like ‘Wild West’ have been bandied about and thoughts quickly turned to the ‘chaos’ that could arrive in Castlebar on May 13th.

Now, I think everybody is in agreement that these scenes have no place in a game watched in front of 10,000 people including many children but these have become all too common in the modern game.

Gaelic Football is one of the great arts when played with the spirit in which it was created but now the ability to drag opponents down and wrestle with the opposition have become vital traits in gaining an extra edge.

Stephen Rochford can state that three Galway players were booked to only Aidan O’Shea when the first interaction took place.  He is correct but let’s not forget that he had two players sent off afterwards.

Walsh can claim he didn’t have a good view of proceedings and one can’t blame him for keeping his counsel even if it’s impossible not to have seen what looked a comfortable Galway victory turn into a fracas that is now ‘expected’ in the modern game.

Galway have had to learn the ‘Dark Arts’ even if they still rely on the traditions of the game to exploit a counter attacking defensive system to their advantage.  The Tribesmen don’t just want to cut their losses against the big teams; they want to win!

"There is a problem with the way players tackle now" – League Sunday on Galway-Mayo melees pic.twitter.com/xQuF8LZzrJ

And one can’t blame Galway (or Mayo) for standing their ground in the ‘man’s game’ even if tests of strength compare more to 3am Saturday nights outside nite-clubs to what is supposed to be one of our national games.

The referee dealt with those who clearly broke the rules and neither team, rightfully, was going to back down when bigger tests await in three months.  It’s not their fault that the black card is a pathetic compromise that is issued inconsistently and often used tactically.

The amount of bollixology – wrestling, grappling, dragging, sneaky afters – Gaelic football tolerates is pitiful. Is that what’d you want your young fella at? #galwaymayo

Until continuous yellow cards carry suspensions like what occurs in soccer, Gaelic Football is going to continue having days like these.  The best footballing teams will win the trophies but one only has to look at recent clashes between the intercounty ‘top three’ for examples of how skill alone can’t reach the Holy Grail.

The talking point from last year’s Kerry/Mayo All-Ireland semi-final was Kieran Donaghy’s red card following a punch at O’Shea.  And the All-Ireland Final will be remembered for Donal Vaughan’s sending off and Lee Keegan throwing his GPS Tracker quicker then Dean Rock’s winning point.

Disciplinary committees can look at last Sunday and issue sanctions if they wish.  But that won’t do any good until they look at the rulebook, the inconsistent applications of the basics and give teams a serious deterrent from allowing the majority of key matches from being spoiled.

Galway and Mayo are both responsible for the part they played on Sunday.  But the reality is if either relented, they would have been accused of not having the stomach, or fight, to go to the next level.

They will wage war in Castlebar and it’s a guaranteed sell-out.  It’s becoming the biggest rivalry in the country at present after Dublin vs Kerry.  The media can fill pages all week about the ‘shameful’ scenes in Salthill but they’ll just be ignoring the fact that this has now become the norm

And won’t change until the GAA started implementing rules to improve its product rather than being tied down at Congress meetings where votes are cast in self-interest above the overall good of the game.