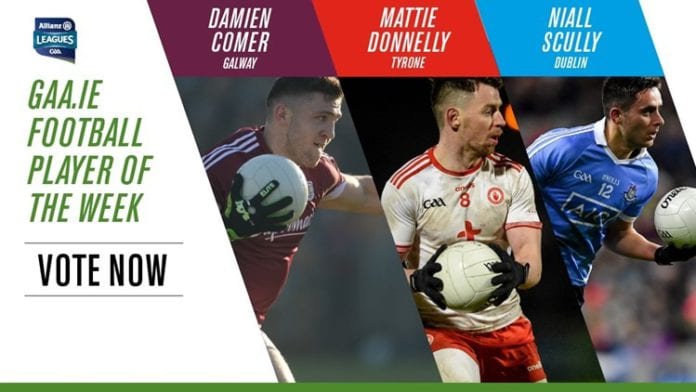 Galway captain Damien Comer has been nominated for the GAA’s Player of the Week after his display in Sunday’s National Football League victory over Mayo.

The Annaghdown man has been in superb form this year and led the charge in the opening minutes kicking two points as Galway took a lead they never relinquished.

Congrats to Galway’s Eoghan Kerin, Damien Comer, and Eamonn Brannigan who all made the GAA’s Football Team of the… https://t.co/63gFtqOCaO

“We’re absolutely delighted,” said Comer to the assembled media afterwards.  “It was a tough old battle with our neighbours Mayo.”

“Three wins from three — coming up from Division 2 — not many would have expected us to be getting one win never mind three in a row.”

Of course, despite the result effectively ensuring they’ll remain a Division One team for the foreseeable future, he couldn’t avoid questions about the game’s conclusion that resulted in three red cards.

“Galway and Mayo is always going to have its own bit of spark,” added the full forward.  “It was evident in the second half. It’s a bit of handbags stuff. It’s the fact that everyone had an eye on May 13.

“They were all looking forward to that and no one wanted to give a backwards step and that led to the bit of argy-bargy.”

Even though Galway don’t see league action again until Sunday, 25th February when they travel to Kerry, Comer will be busy as he also captains NUIG in the Sigerson Cup semi-final on Wednesday night (7pm Portlaoise).

If they win, there’s a final against Ulster University or UCD on Saturday (3.30pm Santry).  If not, Galway face Roscommon in the FBD League decider on Sunday (2pm Dr. Hyde Park).

“The body has got a fair old going in the last few weeks,” concluded Comer.  “I am feeling like soccer player in that you have a game on the weekend and a game midweek.

“In fairness to us we are not really training at the moment we are just playing the games.”

Captain of @Galway_GAA Damien Comer was influential in his teams victory in Salthill in the #AllianzLeagues. Is he your https://t.co/gvXdqh656y Player of the Week? Cast your vote on Instagram now! pic.twitter.com/SCdZTuG0ju