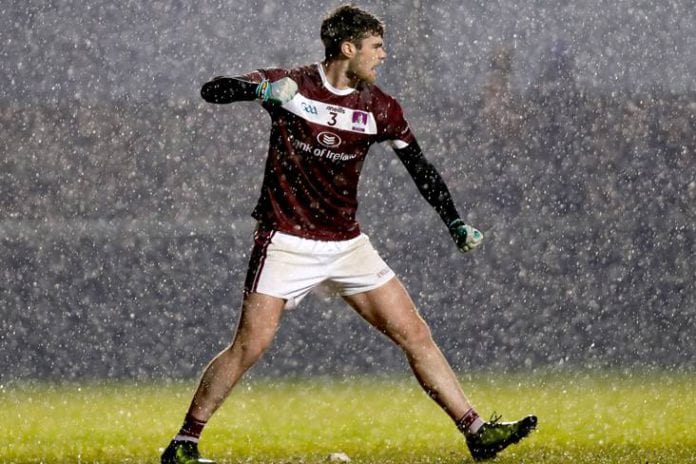 NUI Galway qualified for the Sigerson Cup Final for the first time since 2003 when they beat DIT in Mullingar on Wednesday night.

Goals from Sean Kelly and Eoin Finnerty gave the Tribesmen control and they will now seek their 23rd title on Saturday against UCD (3.30pm Santry).

However, they’ll do so with Kieran Molloy who will be tied with Corofin’s All-Ireland club semi-final against Kildare’s Moorefield (Saturday, 2pm Tullamore).  And he will be joined by club team mate Liam Silke who played his part in UCD overcoming Ulster University after extra-time.

Owen and Adam Gallagher gave NUIG the early initiative but the teams remained tit-for-tat in the scoring as DIT clawed themselves back level at 0-5 apiece.

After Adam Gallagher put NUIG back ahead, Galway senior Sean Kelly made his impact hitting the net and they went in 1-6 to 0-7 at the interval with Loftus and Hurley contributing for DIT.

However, the Dublin college did work their way back into contention levelling at 1-9 to 0-12 before the introductions of Finnerty and Molloy had a stunning effect.

Finnerty blasted the second goal on 48 minutes giving NUIG a three-point cushion before Molloy split the posts putting distance between them.

Hurley and Killian O’Gara reduced arrears but Tierney and Adam Gallagher had NUIG in the driving seat entering the closing stages.  They did though have to endure six minutes of added time after Conor Madden’s score left one kick in it but NUIG held on to book their place in the final.

At 22 wins, they are the second most decorated winners in the Roll of Honour but now face 33-time winners UCD, managed by former Galway All-Ireland winner John Divilly in the final.

It’s baffling how a game of this importance can clash directly with another in Corofin verses Moorfield.  But the strength NUIG’s bench carried them through this game and will be vital to achieve victory on Saturday.

NUIG face UCD in the Sigerson Cup Final on Saturday (17th February) at 3.30pm in Santry.

Kieran Molloy and Liam Silke will miss the Sigeron Cup final because they play Moorfield in the club semi final on Saturday. THREE important competitions overlapping with matches fixed for the same day. Beyond belief

It’s phenomenal that Ciaran Molloy and Liam Silke may have to make such decisions if colleges win. 2 matches 1.5 hours apart…in February https://t.co/DBv678RS8c

John Fallon wrote for rte.ie – “DIT never managed to get ahead in the contest in Mullingar and NUIG struck for crucial goals in either half to advance to the final.”

The Irish Times said – “NUIG’s ability to get goals at crucial stages proved decisive as they booked a place in the Sigerson Cup final.”

And the Irish Independent wrote – “NUIG, the second most prolific winners of the Sigerson Cup, advanced to their first final since 2003 when they held off a DIT comeback in heavy rain at St Loman’s GAA grounds in Mullingar.”

Bill Murray takes to the green in Galway for golf show

Michael Malone - September 27, 2021 0
House prices in Co. Galway are over 14% higher than they were this time last year, the latest Daft.ie report shows.The average house listing...

No change in number of COVID patients in Galway hospitals

Two day festival at Claregalway Castle comes to a close