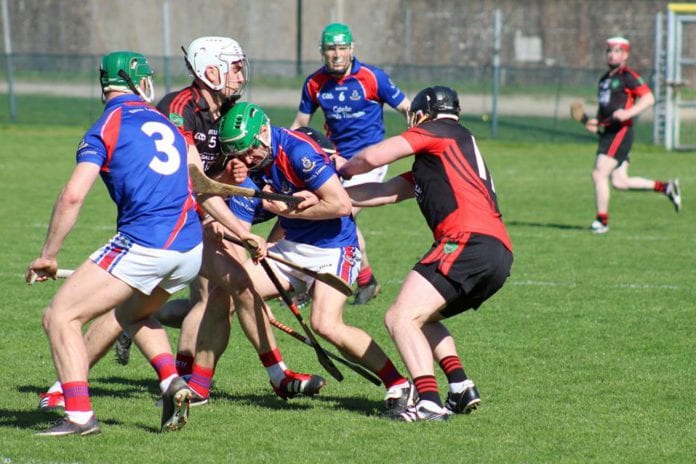 This contest ended in a welter of excitement as both clubs maintained their unbeaten starts.  After Jason Flynn struck a penalty to put Tommy Larkins 1-10 to 0-12 ahead, St. Thomas hit back with four unanswered scores.  But after Eoghan Nevin’s goal restored parity, Larkins rescued this.

This was one of the weekend’s eagerly awaited ties and Tommy Larkins started with Eamonn Hayes and Flynn before Conor Cooney converted three placed balls to put St. Thomas ahead.  He added one from play and David Burke opened his account on the quarter hour.

Cooney’s fifth made it 0-6 to 0-2 before Flynn ended Tommy Larkins’ 15-minute drought.  They were playing into the strong breeze blowing from the town goal in Ballinasloe but didn’t want to let their opponents enjoy too much of a cushion.

Gutsy fightback in the last few minutes to share the spoils and earn a point. #LarkinsAbú #InUnityThereIsStrength pic.twitter.com/xsXwSDtUpl

The first half never really caught fire but the second was always on the verge of exploding.  Eanna Murphy was one of Tommy Larkins’ top performers through his saves but his long puck out set up Niall Kelly for their next score before Brian McCormack picked out Conor Gardiner to make it 0-10 to 0-8.

Brendan Farrell scored for St. Thomas but two Flynn placed balls left Tommy Larkins just 0-11 to 0-10 behind. But on 40 minutes, Anthony Kelly won a penalty but referee Christopher Brown overturned that decision after Kelly lashed out at Murphy afterwards and a throw in ball was the result.

Cooney put St. Thomas 0-12 to 0-10 ahead entering the final 10 minutes but Flynn’s penalty turned the tie.  Eanna Burke, Farrell, Cooney and Damien McGlynn made it 0-16 to 1-10 in St. Thomas’ favour before Nevin’s equalising goal.  David Burke and Cathal Kelly traded points before the finish.