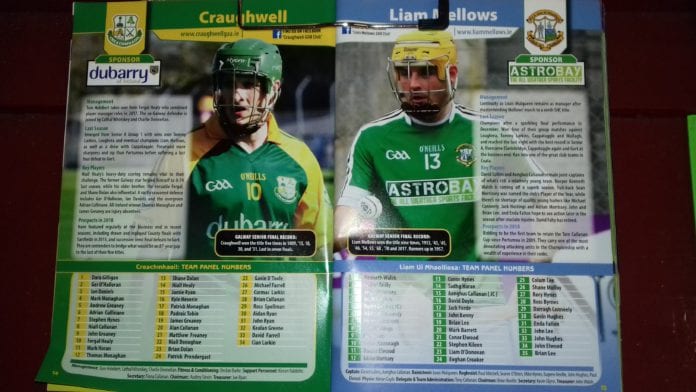 Liam Mellows continued where they left off four months ago as the reigning county champions began with a six-point victory over Craughwell on Sunday evening.

Six unanswered points proved to be the crucial difference as it turned a tight contest into one-way traffic.

The sides were level 0-9 apiece at half-time before Adrian Morrissey gave Louis Mulqueen’s team a lead they never relinquished on 33 minutes.

When Kevin Lee flew down the left flank before finding the target on 47 minutes, Liam Mellows were 0-15 to 0-9 clear and their lead never looked under threat.  Niall Healy did hit back with two Craughwell minors but Morrissey replied each time on his way to a 13-point personal tally.

Craughwell, who were without the injured Thomas Monaghan, did chase salvation in the closing stages as Healy was denied two goal attempts by Kenneth Walsh and David Collins.

The game started at a frantic pace with four scores shared in as many minutes.  Shane Dolan and former player/manager Fergal Healy tallied for Craughwell with Morrissey getting a Liam Mellows brace.

The latter’s frees were punishing any Craughwell infractions but the east Galway team were doing damage themselves.  Healy got two frees either side of a Jamie Ryan point to give them a 0-5 to 0-4 lead on 12 minutes.

Morrisey kept Liam Mellows’ account ticking as they game went through its first lull before picking up again with nine white flags in the final 10 minutes.

Morrissey (2) and Tadhg Haran gave the city side a 0-7 to 0-5 advantage but Healy restored parity before putting Craughwell ahead again.

A first half where the teams were level eight times continued in the same manner.  Morrissey equalised, Alan Callanan pointed for Craughwell and Conor Kavanagh sent them in on level terms before Liam Mellows pushed on after the restart.

Mellows get back in action on April 8th as they take on Craughwell #KingfisherRenmore pic.twitter.com/v0OAu4FbzT