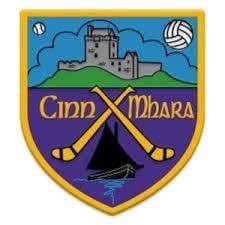 Kinvara and Kilconieron are joint leaders of Group One in the intermediate hurling championship ahead of the summer recess with just one outstanding game from the opening two rounds.

Annaghdown and Killimor fell afoul of the weather on Tuesday night and that postponement didn’t help either ahead of their weekend assignments.

Kilconieron edged an exciting tussle in Ballinderreen on Saturday as they got past Annaghdown by 0-18 to 0-17.  While in Loughrea, Killimor went down 0-13 to 0-9 against Kilbeacanty who were also making their tournament bow.

Kiltormer’s opener had been postponed in Round One but they did kick off on Sunday, 15th April as they ran out 6-16 to 1-8 winners over Castlegar’s second team.  And they came close to a second victory the seven days later.

Darragh Glynn’s team led for most of the second half in Carnmore on Sunday and were 1-12 to 0-14 ahead with one-minute remaining.  But Killimor, who drew their first outing against Kilbeacanty, squeezed out the result again to get three late points and secure their first victory.