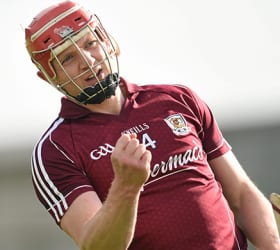 After only scoring two goals during their triumphant 2017 All-Ireland Hurling Championship, Galway kicked off the defence of their crown with five green flags against Offaly in O’Connor Park on Saturday (12th May).

Debutant Brian Concannon was on hand for two majors while Joseph Cooney, Conor Whelan and Jason Flynn also rattled the Faithful net and give the Tribesmen the perfect start to the round-robin stage.

But their goal shy summer run from 2017 was out of character for the small stick wearers of the maroon and white as Galway teams have regularly been known for goal scoring sprees since their arrival in the Eastern Province.

Galway’s historic start in the Leinster senior hurling championship sent supporters home happy as they ran out comfortable winners over the O’Moore County despite Kevin Hayes getting sent-off following a ‘schmozzle.’

Niall Healy struck a hat-trick finishing with 3-5, Joe Canning also had a first half major as he tallied 1-10 and Damien Hayes found the net in a dominant display from John McIntyre’s men.

While recognising the threat from their midland rivals, the concession of 4-12 didn’t suggest that the All-Ireland finalists were in Mullingar in June but they did the damage the other end.

James Regan had a first half goal as the Tribesmen built up their match winning 10 point lead.  But wing forward David Burke added two more majors after the restart before Cyril Donnellan and Andy Smith completed Galway’s win.

But with back-to-back goal sprees, Galway were showing signs of serious ambition when they took another big victory against Offaly in the semi-final in Portlaoise.

Conventional wisdom tells us that Galway don’t do comebacks but they delivered the most sensational of all in this semi-final in Tullamore.  Niall Burke and Joe Canning had got early goals but 1-8 uanswered in the second half had Kilkenny in the driving seat.

With seven minutes remaining, the Noresiders were 10 clears but two Conor Cooney strikes and Canning’s second penalty completely overhauled this contest.  Henry Shefflin gave Kilkenny back the lead but Canning equalised to force another day out.

After surviving the opening instalment in Croke Park, Galway ran riot in this Tullamore replay with Cathal Mannion announcing his arrival on the national stage.

The Ahascragh/Fohenagh man goaled after just 45 seconds and only needed another 11 minutes to complete his hat-trick as the Tribesmen went out of sight before Joe Canning made sure of it with two second half majors.