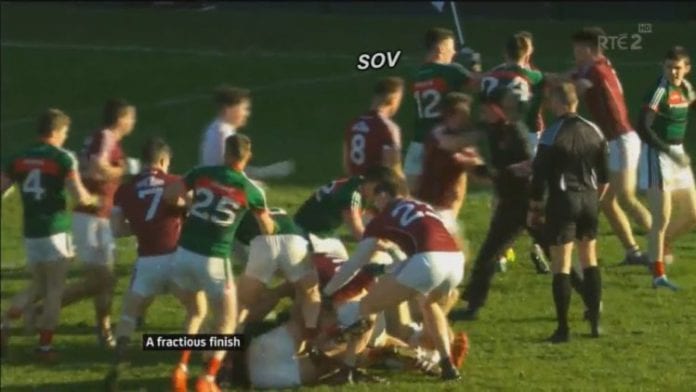 The Galway and Mayo County Boards have been fined €4,000 each following the late brawl that took place last Sunday during their National Football League clash in Pearse Stadium.

Galway won 1-13 to 0-11 giving them their third victory of the campaign but the altercation involving more than 20 players was the main talking point.

Four yellow cards were issued after the incident on 68 minutes but it set the tone for the remainder of the game as three players also received red cards in a fiery showdown that sets the stage for their Connacht Championship clash in Castlebar on May 13th.

Galway’s Paul Conroy and Mayo’s Diarmuid O’Connor received second yellows and will serve no further sanctions but Mayo weren’t so lucky receiving two suspensions as well as the monetary penalty.

Cillian O’Connor’s high elbow on Eoghan Kerin resulted in a straight red card and he’ll serve a one-match suspension missing their team’s meeting with Dublin in Round Four.

@Woolberto I hope @The_GAAHour discusses Cillians constant fouling in games. he gets away with it so often. he should have had black and red besides this (in 1st half). just play football. #mayo #galway pic.twitter.com/JNhlPxFpth

And Mayo selector Tony McEntee has been banned for eight weeks.  The Armagh man, their official runner, was always likely to be sanctioned having been caught up in the incident when the contest turned sour.  He’s charged under Rule 7.2 © which governs misconduct from team officials.

It’s unsure yet whether either county will accept their punishments as they have today to decide whether to appeal or not.  Should Mayo accept their penalties, McEntee will be consigned to the stands for the remainder of the league.