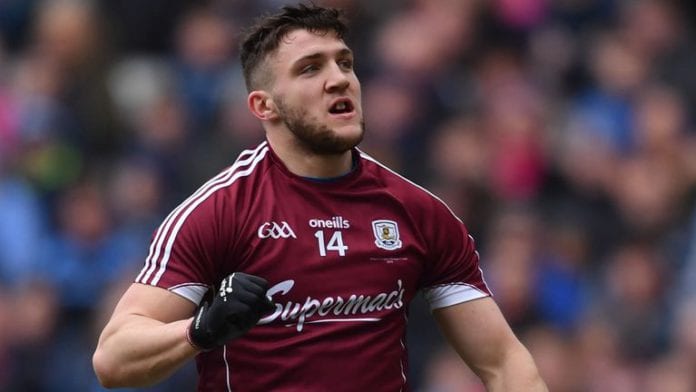 Galway’s Damien Comer was among the first PwC GAA/GPA Player of the Month award winners for 2018 presented with their trophies in Dublin on Monday morning.  The Annaghdown forward was announced as the football winner, while Tipperary’s Jason Forde picked up the hurling award.

Comer was a key player in Galway’s successful Allianz League division one campaign. The Tribesmen missed out on the 2018 title, with defeat to Dublin in the final; their only loss of the entire league. They battled with Comer causing problems throughout. He scored 0-3 on the day.

Galway’s Damien Comer and Tipperary’s Jason Forde with their PwC GAA/GPA Player of the Month Awards for April! #PwCAllStars pic.twitter.com/oYyXErdSWw

“Well done to Damien and Jason on their respective football and hurling awards after hugely impressive finishes to their league campaigns,” said GAA President John Horan on the GAA’s official website.

“Damien played a starring role throughout Galway’s campaign helping them to another final while Jason’s scoring returns were the stand-out feature of Tipperary’s march to a hurling final appearance.

“Congratulations to Damien and Jason on being honoured with this award,” added GPA Chairman and acting CEO Seamus Hickey.  “This award always holds a special significance for players when they have been chosen by their peers.

“Both Damien and Jason are very deserving winners who have demonstrated great leadership and drive whilst playing with Galway and Tipperary respectively.  We look forward to seeing more of the same from both men in this summer’s championship.”

Galway face Mayo in the Connacht Senior Football Championship on Sunday, May 13th. Throw-in in MacHale Park, Castlebar is 4pm.