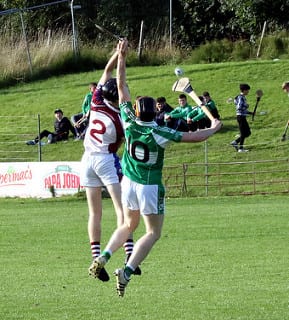 Three first half goals got Castlegar up and running in this year’s senior hurling championship as they flattened the Kilnadeema/Leitrim challenge and probably sent them packing from the competition.

Enda Concannon’s goal after just 40 seconds gave Murt Connolly’s team a lead they never surrendered but two majors before half-time by Kevin Keane and Concannon left no doubt about the winners.

The result was Castlegar’s first win moves them into the ‘top four’ in Group One and another positive result over Craughwell on Saturday (15th September) in Kenny Park will book a spot in the preliminary quarter-finals.

Concannon took his break for the early goal and added a point three minutes later but Castlegar only led 1-1 to 0-3 after eight minutes as Mikey Lynch and Brian Molloy (2) tallied for Kilnadeema/Leitrim.

Joe Kenny’s team were down personnel through injuries and emigration but this was still a very poor display from a side who only lost their previous outing (against Craughwell) to a late goal.

Castlegar started pulling clear outscoring their opponents 0-7 to 0-2 as Jack Coyne, Dean Higgins (2), Concannon (2) and Ger Farragher (2) gave them a 1-8 to 0-5 advantage before Molloy reduced arrears.

Lynch got the other two Kilnadeema/Leitrim minors but their race was run at half-time.  Farragher put six between them again before Sean Connolly set up Keane for the second goal.  And a long Johnny Murphy drive on 35 minutes allowed Concannon make it 3-9 to 0-6 at half-time.

Molloy replied with two frees after the restart but there was no way back for the east Galway team.  Five more from Farragher and a Keane minor had Castlegar 3-16 to 0-8 ahead on 49 minutes.

Again, Molloy split the posts from the right but after Concannon and Farragher added to Castlegar’s tally, a second yellow card for Tony Molloy ended his involvement leaving Kilnadeema/Leitrim to conclude with 14 players on a frustrating evening.

They finished with Molloy and Dylan Towolwai troubling the umpires but Castlegar were in auto pilot.  Farragher, Connolly, Concannon and Adam Mooney all registered before the finish giving them a comfortable win and re-stamping their involvement in the championship race.